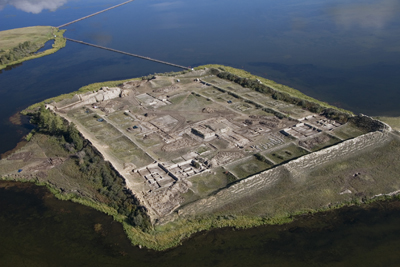 Recent excavations have shown Medieval ruins in the Russian republic of Tuva were monastic and reminiscent of China’s ‘Forbidden City’.

Por-Bajin – meaning Clay House – sits on a small island in the centre of a remote lake in the Shojgu’s native Russian republic of Tuva, high in the mountains of southern Siberia and 32km (20 miles) from the Mongolian border. Thought to have been built by the Uighurs, the nomadic people who once ruled much of Mongolia and southern Siberia, Por-Bajin occupies a 3-ha (7.5 acre) site, and has the remains of more than 30 buildings standing within walls that survive up to 40ft in height and 40ft in width.

Sergei Shojgu, a member of the Russian Cabinet who worked on digs in the Altai Mountains as a youth, set up the Por-Bajin Cultural Foundation in 2007 to fund the work of archaeologists studying these Medieval ruins. Professor Heinrich Härke, a specialist in early Medieval archaeology who recently took part in excavations at the site, directed by Irina Arzhantseva of the Russian Academy of Sciences, says the site had long been interpreted as a royal residence or fortress, yet it did not conform to the typical plan of such structures.

A clue to the island’s possibly monastic purpose came from timbers on the site, dated through dendrochronology to the period from AD 770 to 790 – the era when the Emperor Bö-gü¸ converted to the religion of Manichaeism, under the influence of China, which he then made the official religion of the Uighur Empire.

It is this Chinese influence, says Heinrich, that makes sense of Por-Bajin: the layout of the site, with its echoes of the imperial ‘Forbidden City’, and the techniques used for the wall and roof construction are so reminiscent of Tang Dynasty ritual architecture of AD 618–907 that perhaps Chinese architects and builders were directly involved in the construction of this complex.

Por-Bajin owes its demise to a series of disasters: there is evidence for at least one earthquake that left large cracks in the walls and bastions, perhaps even before construction of the monastery was complete. Attempts to repair the damage are evident in the second (inferior) layer of wall plaster applied to some of the cracked walls. Ultimately, the site was destroyed by a fire. Por-Bajin was never rebuilt and was probably very short-lived, possibly because the Uighurs were defeated by local tribes shortly after their conversion to Manichaeism and expelled from the region.

Even so, Chinese Uighurs, who have long desired autonomy, see the site as evidence of the advanced development of Uighur culture at an early period in their history, and so the site has acquired a modern political significance: Vladimir Putin, when President of the Russian Federation, interrupted a hunting trip to visit the site. Chinese archaeologists are interested in Por-Bajin because of the high level of preservation at the site, especially the wooden construction, which is in better condition at Por-Bajin than at similar Chinese sites from the same period.