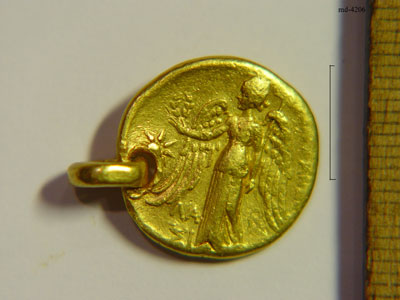 Archaeologists have identified a spectacular 2,200-year-old warrior burial in Russia, part of a previously unknown necropolis in the central Caucasus mountains.

Located 800m (2,600ft) above sea level, near modern Mezmay, the site came to the attention of archaeologists after Krasnodar Regional Museum was alerted to large-scale looting in the area. Museum staff, directed by Nikolay Shevchenko, went to investigate, and found a heavily disturbed complex of flat graves, with more than 100 pits dug by robbers over the one-acre (half hectare) site.

Subsequent excavation revealed one burial had been missed by the looters, however: the grave of an adult male accompanied by a rich array of grave goods. Apparently a wealthy warrior during his life, the man had been laid to rest in a stone cist containing his wooden coffin and an impressive range of weaponry. Together with two bronze helmets, a rolled-up piece of chainmail, an axe, and 12 spears, the team found an iron sword by his side, another blade over each arm, and the longest, measuring 1m (3ft), between his legs.

Other artefacts spoke of the lavish lifestyle the man was expected to enjoy in the next world: they included a bronze mirror, glass vessels, gold brooches and plaques that would have been sewn onto his clothing, and an elaborate iron tripod decorated with sculpted deer. The articulated skeletons of three horses, still wearing their iron bridles, and a cow were found in the upper levels of the grave-pit.

As little archaeological work has been done in the central Caucasus to-date, little is known about which culture the burial ground belonged to, although the discovery of two more bronze helmets and fragments of three others, found among the looters’ spoilheaps, indicates that there may have been other, similarly ostentatious burials on the site.

Dr Valentina Mordvintseva, who co-authored a paper on the findings recently published in Ancient Civilizations from Scythia to Siberia, said that the grave was clearly that of a high-status man, held in high esteem by his people.

‘I think this grave belonged to a local chieftain,’ she told CWA. ‘It is rare to find such rich offerings, such as the quantity of swords, richly adorned with gold fittings, and helmets.’

She added: ‘The necropolis could have belonged to a cattle-breeding tribe, who made their fortune through trade with merchants using the mountain pass to travel from modern Georgia and Armenia.’