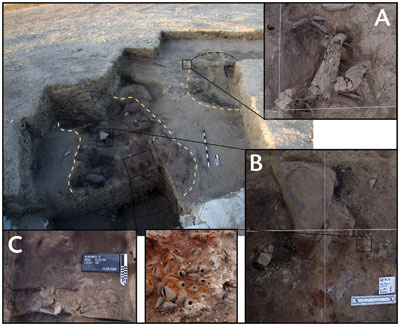 Excavations in Jordan have unearthed 20,000-year-old huts that could reshape our view of how humans lived before the development of agriculture.

The research, recently published in PLoS One, suggests hunter-gatherers in this region had fixed settlements with extensive trade networks 10,000 years earlier than previously thought. ‘Kharaneh IV is one of the densest and largest Palaeolithic open-air sites in the region,’ said Dr Lisa Maher, from the University of California.

Between 2008 and 2011, investigations at the 2ha site uncovered evidence of intense occupation, including concentrations of animal bone and hundreds of thousands of stone tools. Inside the two huts, radiocarbon dated to 19,300-18,600 BC, archaeologists found hundreds of pierced shells, suggesting far-reaching trade links that are usually associated with much later cultures. ‘These shell beads were brought to the site from the Mediterranean and Red Sea over 250km away,’ Dr Maher said. ‘This shows that people were linked to regional social networks and exchanged items across considerable distances.’