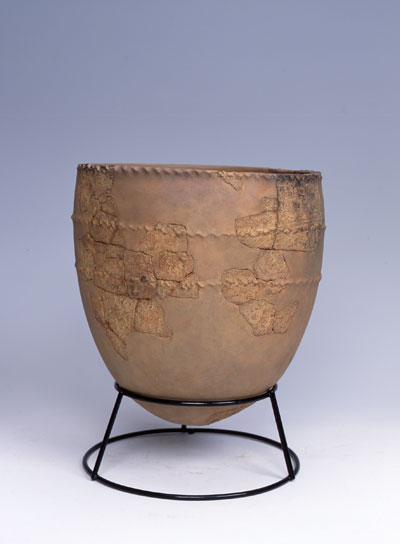 Analysis of some of the world’s earliest pots  has revealed that Ice Age hunter-gatherers  used them to cook fish.

By studying charred food residues inside over 100 pots made across Japan during the J¬ōmon period (14,000-300 BC), an international team of researchers have found the earliest direct evidence for how ceramic vessels were used.

While the invention of pottery was traditionally associated with the development of agriculture during the Neolithic period, it is now known that ceramics were made thousands of years earlier (CWA 54) – though reasons for the emergence and widespread uptake of this new technology have remained unclear. The new findings from isotope analysis, recently published in Nature, sheds new light on the purpose of some of these early pots.

‘By analysing fat residues preserved in organic crusts found on pottery from the Incipient J¬ōmon period, we can see what the vessels were used for,’ said Sven Isaksson, Associate Professor at the Archaeological Research Laboratory and the Centre for the Study of Cultural Evolution at Stockholm University. ‘The results show that a significant proportion of the vessels were used to prepare fish, both freshwater and marine.’

‘The reliability and high abundance of food along shorelines and riverbanks may well have provided the initial impetus for an investment in producing ceramic containers, perhaps to make the most of seasonal gluts or as part of elaborate celebratory feasts, and could be linked to a reduction in mobility,’ added project leader Dr Oliver Craig of the University of York. ‘This study demonstrates that it is possible to analyse organic residues from some of the world’s earliest ceramic vessels. It opens the way for further study of hunter-gatherer pottery from later periods to clarify the development of what was a revolutionary technology.’