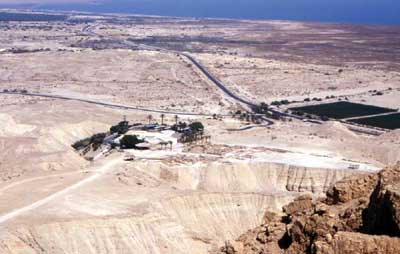 The first of the scrolls was found by a lowly bedouin shepherd in 1947, the last by archaeologists in 1956. For much of the time since their discovery, the 800 documents have been at the centre of controversy.

A few survive complete, most only partially, and represent some 400 separate compositions (as the corpus includes many copies). Handwritten in ink, on vellum or papyrus, the pieces were sewn together and rolled into scrolls to make complete documents. They were placed in ceramic jars and buried in 11 caves around the site of the Essene monastery at Qumran. The monastery itself was destroyed by the Roman army in AD 68.

The Dead Sea Scrolls represent the contents of the monastic library of a radical Jewish missionary sect called the Essenes. The earliest documents date from Hellenistic times (c.250 BC) and the latest from the time of the First Jewish Revolt (c.AD 68). The languages used were mainly Hebrew, some Aramaic, and very occasionally Greek.

There were three broad classes of document: versions of holy scripture; sectarian religious works such as commentaries, liturgies, and psalms; and those concerned with the organisation of the sect, its ideological perspective, and its politico-military strategy.

The Scrolls reveal the Essenes’ commitment to overthrow their oppressors (Greeks, Romans, and the Jewish elite), and restore the land to its people. This struggle is conceived in religious terms: the ‘sons of darkness’ are to be defeated by the ‘sons of light’ in a (literally) apocalyptic war that will restore the broken covenant between Jehovah and the Israelites in the Promised Land.

Read in the context of the Christian Gospels, they imply that Jesus Christ was part of a wider revolutionary movement in ancient Palestine committed to the struggle against oppression on earth. They also demonstrate that Graeco-Roman culture – still so admired today – was actively contested by alternative world-views. Moreover, they indicate that Classical ‘civilization’ was mainly for the elite, and that the peasants – the great majority of the ancient world – saw things very differently, only such evidence has usually been lost.

In this sense, the Scrolls are exceptionally rare: they represent ordinary voices calling for revolution against empire more than 2,000 years ago. No wonder they have caused so much controversy!