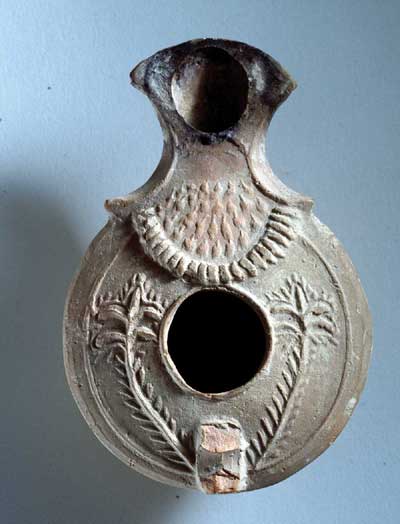 A new exhibition at the Bible Lands Museum Jerusalem is proving to be an enlightening experience.
The exposition, entitled Let There Be Light – Oil-lamps from the Holy Land, draws together oil-lamps from Christian, Jewish, Samaritan and Islamic traditions. It traces their development over three millennia, so illustrating something of the history of the Holy Land, while also illuminating elements of a common history between the various peoples who now live there.
Oil-lamps were used in temples, churches, synagogues, and mosques but were also one of the most essential household appliances in antiquity. The Jewish texts, for example, tell us that it was among the items that a husband was obliged to supply for his wife, even if separated from her (Tosefta, Ketubot 5:8). Moreover, an individual who lacked a lamp was in desperate straits: to be ‘in want of all things’ meant ‘in want of lamp, of knife, and of table’ (Avot de-Rabbi Nathan, version A, ch. 20).
Throughout the Holy Land and its neighbouring regions, clay lamps were frequently decorated with motifs and symbols of various kinds, often religious. This proved to be a popular art and was a powerful medium for conveying beliefs, hopes and ideas.
Wherever Jews dwelt, whether in Judaea or in Transjordan, or even farther afield, they decorated their lamps with Jewish symbols – the façade of the temple, the menorah, the chalice and the amphora, the lulav and ethrog of the holiday of Succoth (Tabernacles), and especially, the Seven Species of the Holy Land, including ears of grain, grapes and pomegranates,
Christian lamps, manufactured in the Holy Land from the 4th century, also bear a variety of imagery, in particular, diverse-shaped crosses. Pagan lamps of imperial Roman manufacture bear sundry scenes, such as a harbour with ships and a charioteer driving his chariot as well as mythological images such as the bust of the god of the Sun Helios.
However, the Samaritan and Islamic traditions eschew the figurative decorations of the pagans. Both prefer linear and geometric images on their oil-lamps. For instance, the six-pointed star appears among the decorations in both these traditions.
Nonetheless, shared symbols also permeate the repertoire – notably the date palm, which can be seen on a Jewish lamp, a Christian lamp, a Samaritan lamp and an Islamic lamp. Indeed, its significance in the religious, cultural, and agricultural life of the region’s peoples is expressed in its appearance on a variety of objects, not only on oil-lamps. Thus it features in synagogue decorations, such as the 3rd century synagogues at Capernaum in Galilee, and in church ornamentation – for example at the newly excavated church floor found at Kathisma near Bethlehem dated to the fifth century. And among the Muslims, it is said that Muhammad pronounced that ‘There is a tree among the trees which is as blessed as a Muslim… It is the date palm’.
The exhibition, Let there Be Light is set to run until June 2005 at The Bible Lands Museum Jerusalem, 25 Granot Street, Jerusalem, www.blmj.org