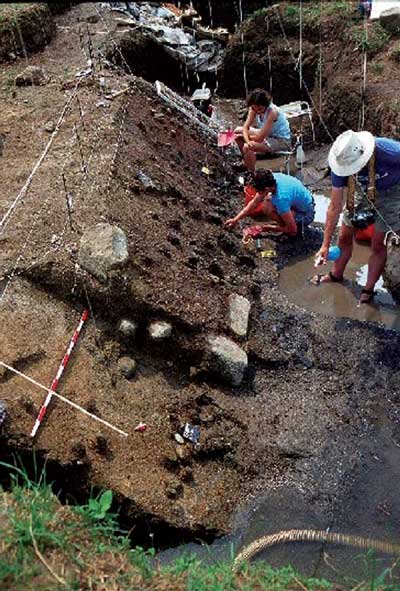 Archaeologists digging in Israel have found the first solid evidence for the human use of fire in Eurasia. The evidence, which includes burned fragments of flint, wood, fruit and grains, dates to 790,000 years, and was found in excavations conducted by the Hebrew University of Jerusalem Institute of Archaeology.

The discovery was made during seven seasons of excavations at the Benot Ya’aqov bridge site along the Dead Sea rift in the Hula Valley of northern Israel. Professor Naama Goren-Inbar, head of the Institute of Archaeology and director of the Benot Ya’aqov excavations, says that this is the best evidence yet found for human use of fire during the period of the Acheulian culture (which dates from approximately 1.8 million years to 250,000 years ago).

Charred materials indicate that the early humans living at Benot Ya’aqov knew how to control fire and used it to process food. Additional concentrations of burned flint were also found in distinct areas of the site, suggesting that the inhabitants made hearths for cooking and possibly as a site for gatherings.

This is the earliest definite evidence of its type yet found for Eurasia, which thanks to the waterlogged environment of Benot Ya’aqov, has provided a unique site for preservation of prehistoric archaeological finds. The manipulation of fire by early humans must have been a turning point for our ancient ancestors, since it will have helped to protect them against predators, provided warmth and light, and enabled them to exploit a whole new range of foods.

Evidence for its use has been unearthed in various layers of human occupation at the Benot Ya’aqov site, illustrating that once acquired, the ability to use fire continued down the generations of early humans who occupied the area over the millennia.