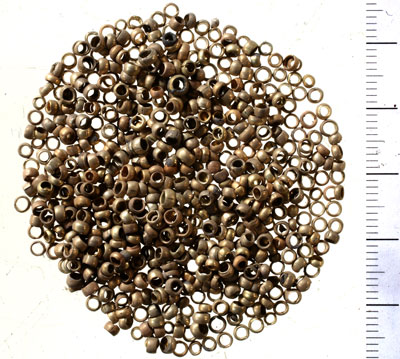 Archaeologists from Tel Aviv University have discovered a 3,000-year-old hoard of jewellery while cleaning a prehistoric pot.

The vessel was found in 2010 at Tel Meggido, an important Canaanite city-state in northern Israel, but remained uncleaned while awaiting molecular analysis of its contents. When conservators emptied the pot, however, they found a cache of well-preserved ornaments including beads, a ring, and earrings, wrapped in a piece of cloth.

TAU doctoral student Eran Arie said the vessel had been buried in a house, dated by its context to c.1100 BC, just after the end of Egyptian rule in the region.

‘Either the jewellery was left behind in the Egyptian withdrawal or the people who owned the jewellery were influenced by Egyptian culture,’ Eran said. ‘The collection includes Canaanite-style moon-shaped earrings, but we also found an abundance of gold items and carnelian beads. Both these materials were frequently used to make Egyptian jewellery in the same period.’