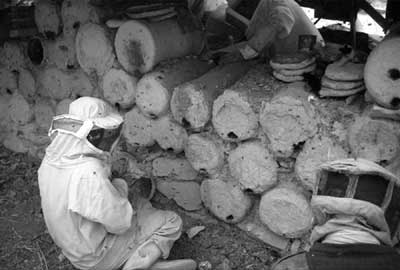 The importance of honey as a staple of ancient diets is emphasised by God’s promise to Moses that he would deliver the people of Israel out of Egyptian slavery and lead them ‘unto a land flowing with milk and honey’ (Exodus 3:8). The events described in Exodus have been given vivid new meaning by the latest discovery of an apiary in northern Israel dating from the 10th-9th century BC Iron Age, the period that is associated with Solomon, and the split of Israel into the southern state of Judah and the northern state of Israel.

The earliest beehives to be discovered in the region to date, have been found in the surprising context of one of Jordan Valley’s most densely built-up Iron Age cities – Tel Rehov (Arabic: Tell es-Sarem) – which Amihai Mazar and colleagues from the Beth-Shean Valley Archaeological Project have been excavating, on behalf of the Institute of Archaeology of the Hebrew University in Jerusalem, since 1989.

The hives consist of three rows of 30 or more clay cylinders, each one 0.8m long and about 0.44m in diameter, with unfired clay walls about 0.04m thick. The best preserved cylinders had a clay wall blocking their western end, in the centre of which was a small hole of just the right size for honey bees to enter and exit, but too small for larger insects, such as wasps and hornets. At the opposite end, the cylinders were blocked by removable lumps of clay, for the bee-keeper to gain access to the honey. Dating evidence came from burnt beams and charred grains that form a destruction layer overlying the beehives, resulting from the burning and collapse of the building enclosing the beehives and of an adjacent granary.

Writing in Antiquity 82 (2008), Amihai Mazar and colleagues ask why beehives were located in a closed structure in the middle of a densely built city? Finds of a decorated four-horned pottery altar and several pottery chalices in the same building complex suggest the beehives ‘were part of a larger complex which had a specialised economic and perhaps religious function’. The potential yield from the 100 or so hives could have been several hundred kilograms of honey per year, as well as beeswax that might have been used in cultic practices. •