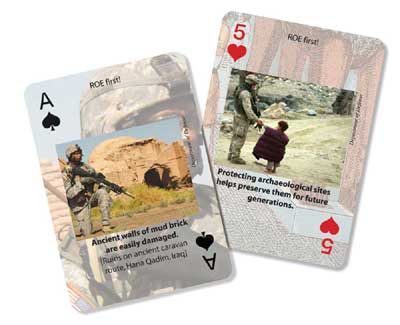 Five years on from the US occupation of Iraq, archaeologists have been attempting to quantify the scale of the damage to the heritage that has been one of the unfortunate and unforeseen consequences of the war. The looting of Baghdad’s National Museum and Library of Iraq in April 2003 was just the start of the problem; since then, sites have been sacked on an industrial scale. Because travelling in Iraq to assess the damage is difficult, Elizabeth Stone, of the State University of New York (SUNY), has been using satellite imagery to track changes in the Iraqi landscape caused by looting.

Her report, published in Antiquity, says that in southern Iraq, the total area of looted sites adds up to 15.75 square km – many times greater than all the archaeological investigations ever conducted in the region. Looting has been greatest at large sites, and those dating to periods most likely to generate cylinder seals, cuneiform tablets and early coins, as well as statues, terracottas and bronzes. She surmises that the quantity of material removed – hundreds of thousands of individual objects – will have saturated the market for Mesopotamian portable antiquities, and that when (if) order is restored to the region, large numbers of objects will be found in clandestine stores, though how well they will have survived, once removed from the ground, is in question.

Though contextual information for the finds will have been lost, she argues for a ‘large-scale, internationally aided rescue programme’, to find and conserve looted objects, and to recover useful information from looted sites where it is likely that intact stratigraphy survives.

In the UK, the British Museum has announced plans for an exhibition to chart Iraq’s traumatic recent history through video and photography and to reveal the role played by coalition troops in the destruction of Iraqi heritage, including the construction of a military camp on the site of ancient Babylon, which the museum’s Iraq and Iran specialist, Dr John Curtis, likened to ‘building a camp next to Stonehenge or in the shadow of the Great Pyramid’.

Senior British army personnel have responded by saying they want to help restore Iraq’s war-scarred and looted cultural heritage. Major Tom Holloway said that British troops wanted to leave a positive legacy by assisting with the restoration of such major archaeological sites as the ancient Sumerian cities of Warka and Eridu. Dr John Curtis said it is encouraging that the army is now taking an interest in cultural heritage.