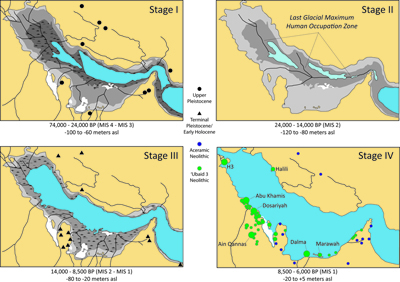 The shallow waters of the inland sea known as the Persian Gulf might well hold the evidence of the earliest human migrations out of Africa, says Jeffrey Rose, an archaeologist and researcher with the UK’s University of Birmingham. In a paper called ‘New Light on Human Prehistory in the Arabo-Persian Gulf Oasis’, published in Current Anthropology (51:6 December 2010), Rose argues that highly developed settlements arose ‘out of nowhere’ around the shores of the Gulf about 7,500 years ago. This corresponds with the flooding of the Persian Gulf basin around 8,000 years by the Indian Ocean, and the obvious conclusion is that the new settlements are those of displaced populations who escaped the inundation.

Rose has plotted some 60 new archaeological sites that appear on the shores of the Gulf after this event, where previously there had only been a handful of scattered hunting camps. ‘These settlements boast well-built, permanent stone houses, long-distance trade networks, elaborately decorated pottery, domesticated animals, and even evidence for one of the oldest boats in the world,’ Rose says, before asking: ‘how could such highly developed settlements pop up so quickly, with no precursor populations to be found in the archaeological record? These new colonists may have come from the heart of the Gulf, displaced by rising water levels that plunged the once fertile landscape beneath the waters of the Indian Ocean.’

Sea level data show that, prior to the flood, the Gulf basin would have been an ideal refuge from the harsh deserts surrounding it, with fresh water supplied by the Tigris, Euphrates, Karun, and Wadi Baton Rivers, as well as by underground springs. This well-watered and fertile landmass may well have been host to early migrants out of Africa, and would have provided ‘a sanctuary throughout the Ice Ages when much of the region was rendered uninhabitable due to hyperaridity’, Rose said.