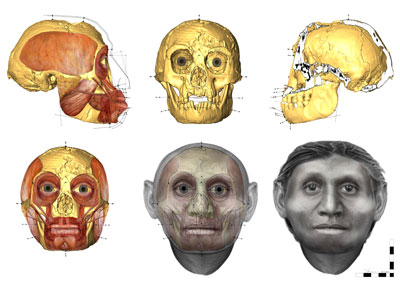 Modern humans can now look their recently discovered relative, Homo floresiensis, in the face thanks to a new reconstruction unveiled at an archaeological conference in Australia.

This species of early human was first identified in 2003 when researchers led by Professor Mike Morwood and Thomas Sutikna found the remains of nine individuals in Liang Bua, a large limestone cave on the remote island of Flores, Indonesia (CWA 22).

Among these was the almost-complete skeleton of a 30-year-old woman, popularly known as ‘Hobbit’ because of her short stature and large feet, whose appearance has now been recreated by Dr Susan Hayes, an anthropologist at the University of Wollongong who specialises in facial approximation. Referring to CT scans and the remains themselves, Dr Hayes digitally rebuilt the woman’s anatomy layer by layer.

‘When I first began in this field, I worked in 3D, using clay over a cast of a skull. But now I’m completely computer graphic,’ Dr Hayes told CWA. ‘This project was undertaken in collaboration with Mike Morwood and Thomas Sutikna, and having that level of expertise to draw upon was fantastic. The approximation took about three months to complete.’

Dr Hayes said: ‘Because I applied known relations between the skull and soft tissues of anatomically modern humans, I was not surprised that she looks a bit like us, though she has no chin, not much of a forehead, and prominent brow ridges. We would describe her as distinctive, rather than pretty, but she is closer to us than chimpanzees, our nearest living relative.’