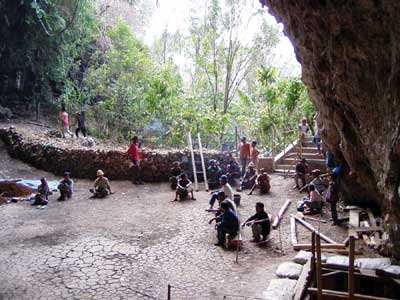 The discovery of ‘a new human species’, Homo floresiensis – dubbed the ‘Hobbit’ owing to its tiny dimensions – caused a sensation when announced to the world in 2004. However, controversy raged over the discovery. Some researchers argued that the bones belonged not to a new species but to a modern human with a combination of small stature and the brain disorder microcephaly. A new study led by Professor Dean Falk of Florida State University rejects the claim of microcephaly, argues that the ‘Hobbit’ possessed a brain type unknown in other hominids, and thus concludes that the Hobbit is indeed a new species.

Skeletal remains of the ‘Hobbit’ were found in September 2003 by a team of Indonesian and Australian scientists at Liang Bua, one of numerous limestone caves on the island of Flores. Researchers found the remains of nine individuals -including a near-complete skeleton, which they named Liang Bua 1 or LB1. LB1 stood at around 1m (3ft) tall, which is about the height of a modern three-year old child, and would have weighed about 25 kilograms (four stone). However, wear on the teeth and growth lines on the skull confirmed this was an adult who had died at around 30 years of age. From the pelvis, they assessed LB1 to be a female. The legbones indicate that she walked upright. Despite this modern upright attribute, researchers were confused by other more archaic traits, notably the relatively small sized skull. At 417ccm, her skull is about the size of a chimpanzee’s – or one third the size of the skull of a modern adult. Moreover her arms are disproportionately longer than ours, her eyebrow ridges are harder and thicker, and LB1 has a sharply sloping forehead with a sloping chin. Her nearest anatomical equivalents lived in the Republic of Georgia, West Asia, almost 2 million years ago, with some features harking back to our 3 million year old human ancestors in Africa. And yet luminescence dating techniques indicated that LB1 died a mere 18,000 years ago. What was going on? Was this a new species, or were these modern humans, stunted in stature and suffering from microcephaly, a rare pathological condition characterised by a small brain and cognitive impairment? The quest was on to discover more.

In September 2006, Professor Teuku Jacob and colleagues published a scientific study in Proceedings of the National Academy of Sciences that argued the Hobbit showed similarities to living pygmies and to microcephalics. However, the results of Falk’s new study, carried out during the past two years in St. Louis, Missouri, with colleagues at Mallinckrodt Institute of Radiology refute this.

Professor Falk and her colleagues compared the Hobbit material with modern microcephalics. They investigated the skulls of 10 normal humans, nine microcephalics, one dwarf, a tenth microcephalic reputed by others to resemble LB1, and the Hobbit. Professor Falk’s team obtained CAT scans for all 21 skulls and then created ‘virtual endocasts’ (computerised brain casts) using specialist software. This was the key to the quest, for the brain leaves a mirror image imprinted onto the skull from which anatomists can reconstruct its shape.

The team then used statistical techniques to study shape differences between the brain casts and to classify them into two different groups: the first microcephalic, the second normal. While the dwarf’s brain and that of the tenth microcephalic fell into the microcephalic category, the Hobbit brain – despite its diminutive size – fell into the normal group.

Moreover, the scientists observed that the Hobbit brain is unique, consistent with its attribution to a new species. For example, despite its small size, the Hobbit’s brain was almost certainly capable of relatively sophisticated thinking – the archaeologists found complex tools and evidence of a fire near the remains of LB-1. ‘People refused to believe that someone with that small a brain could make the tools,’ said Professor Falk, ‘and yet all the evidence indicates they did. They had a type of brain we have not seen before: nothing like that of a microcephalic but advanced in a way that is different from living humans’. Indeed, a previous study of LB1’s endocast revealed that large parts of the frontal lobe and other anatomical features were consistent with higher cognitive processes. ‘LB1 has a highly evolved brain,’ said Professor Falk. ‘It didn’t get bigger, it got rewired and reorganised, and that’s very interesting.’

Consequently, Falk is certain that the Hobbit is in fact a completely separate human species: Homo floresiensis. It is argued that these people are to have evolved from either an unknown smallbodied, small-brained ancestor, or from a larger-bodied relative (perhaps Homo erectus) whose descendants became small in stature to cope with the limited supply of food on the island. ‘Everybody, including our team, wants to know which is correct,’ says Falk. ‘Hobbits’ are thought to have survived until about 12,000 years ago, when a volcanic eruption devastated the region, wiping out the species.