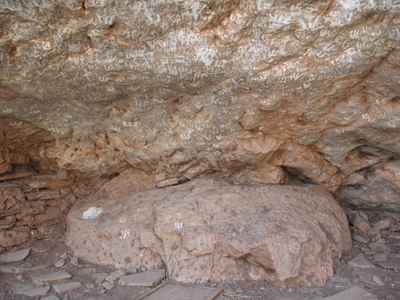 Northern and central India are renowned for their vast amount of rock art of global significance; now an international team has demonstrated that southern India is as rich in art, dating from at least 10,000 years ago.

Rock-art specialist Paul Taçon, of Australia’s Griffith University, has published some 60 new rock-art sites in the journal Antiquity. Found during survey work in the Kurnool District of Andhra Pradesh, India, he says that the earliest surviving pictographs consist of naturalistic outline paintings of animals and human-like figures.

Comparison with similar figures from other parts of India and beyond suggests that this image sequence begins at least 10,000 years ago, and was made by hunter-gatherers.

With the rise of agriculture and of increasingly hierarchical societies, new forms of rock art developed that were much more concerned with the human form than previous art. Taçon and his colleagues argue that these figures may reflect new ritual traditions and burial practices in which elite groups and individuals are demarcated and differentiated. Beyond the Iron Age, the rock art of the Kurnool region reflects influences from nearby parts of India, marking an expansion in the range of contacts.

Rock art continued to be made throughout the historic period: some rock shelters and sites have become focal points for pilgrims, some of whom add their own marks to the growing accumulations of abstract trident-like designs. Some local villagers also make large white human-like figures on the rocky outcrops that line cultivated fields, serving a scarecrow-like function.