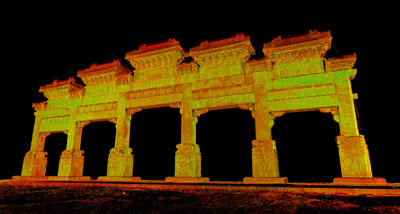 More cutting-edge technology has been put to use by Scottish experts in China, creating 3D models of the Eastern Qing Tombs, the final resting place of China’s last Imperial dynasty.

Designated a World Heritage Site in 2000, the necropolis was in use from AD 1666-1911 and houses 15 tomb complexes containing the remains of emperors, empresses, and concubines.

The project, undertaken by Historic Scotland, Glasgow School of Art’s Digital Design Studio, and CyArk, focused on the earliest and most elaborate tomb, the Xiaoling Mausoleum of Emperor Shunzi (r.1638-1661), and the Jingling Tomb of his son, Emperor Kangxi (r.1661-1722), the longest-reigning monarch in Chinese history.

Over four weeks, detailed laser scans have recorded 6km (3.7 miles) of processional ways, 10 bridges, six towers, four stelae, 46 statues, and over 20 ancillary structures. This data will be used to create 3D models of the tombs, to aid future interpretation and conservation work, such as monitoring wear and tear, and providing source material for remote access and educational programmes.

The work was undertaken as part of the Scottish Ten Project, a £1.5m initiative to create digital models of all five Scottish World Heritage Sites and five international sites, including the Rani ki Vav stepwell in Gujarat, India, and Mount Rushmore in the USA.