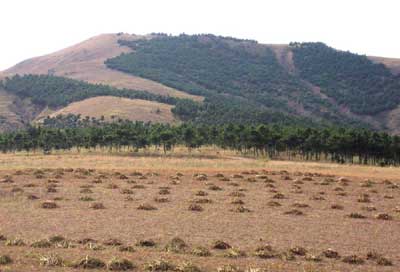 Xinyi Liu, Harriet Hunt and Martin Jones, all of Cambridge University, have suggested that archaeologists in Asia have been looking in the wrong places for early agricultural settlements: in a paper published in Antiquity 83 (2009), they argue that a fixation on river valleys has blinded us to the drier and better drained locations in the foothills of the neighbouring mountain chains, where the true home of China’s earliest agriculture is to be found — just as the locale for early agriculture in south-west Asia is now being sought on the hilly flanks of the Fertile Crescent, rather than in the valleys of the Nile or the Euphrates.

Their argument is based on an analysis of charred grains and plant phytoliths (silicon articles that have a unique form specific to each plant) from numerous sites excavated in China over the last decade: the recovery of plant remains through soil flotation is now routine and has resulted in a critical mass of data from which it is possible to challenge the valley-based model of agricultural beginnings that has long dominated archaeological literature.

None of the sites from which foxtail millet, broomcorn millet and rice have been recovered in quantity lies in the valleys of such major rivers as the Changjiang (Yangtze) and the Huanghe (Yellow) rivers. Instead, they are located along tributary rivers, on the flanks of the hills oriented north to south between the floodplain and rising ground. Typically these are areas with a more complex ecology than the valley bottom.

The authors also note that there is a marked geographical interface between the two types of millet, a pattern that is consistent with the modern distributions of broomcorn and foxtail farms in China, with foxtail cultivation focussed in the wetter south Hebei and north Henan provinces, and broomcorn in the hillier and drier areas of Inner Mongolia and Shandong province. Further study is needed to work out what combination of geological, climatic and biological factors might account for the difference — but answering such questions offers fruitful scope for identifying the location pattern and phasing of early farming sites. •