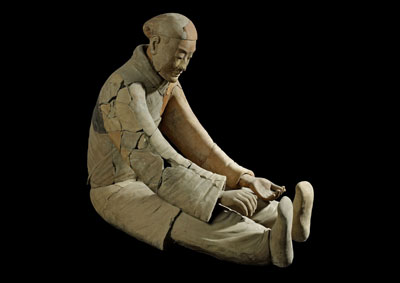 China’s heritage sites are fast disappearing – to tomb-robbers and thieves, or to make way for industrial projects and new developments. These sobering conclusions are the result of research carried out by the country’s own governmental organisation.

The State Administration of Cultural Heritage (SACH) recorded a total of 766,722 ancient ruins, temples, and other sites across the country, of which about 44,000 have already been wiped out. Of those that remain, it stated, about 25% are in a fragile or dilapidated state of repair.

The census is the first of its kind to be conducted in 20 years, and the largest since the founding of the Republic of China in 1949. In the five years it took to complete, 536,001 new sites were added to the register.

Liu Xiaohe, deputy director of the survey, said that many of the sites had been destroyed to make way for commercial construction projects and other new developments stimulated by China’s economic boom.

Even the Great Wall has suffered. Parts have been destroyed by mining, while elsewhere, local entrepreneurs exploit the tourist opportunities the Great Wall affords, but with scant regard for preserving the ancient monument.

The worst-affected region is Shanxi province – home of the Terracotta Army (CWA 26 and 38) – where more than 3,500 cultural sites have disappeared; Hunan comes in second with nearly 2,500 gone, followed by Hebei province, which has lost more than 1,900 sites.

Former director of SACH and now head of the Palace Museum in Beijing, Shan Jixiang called for greater public awareness, and asked the Chinese government to ensure those laws and regulations protecting heritage sites are better enforced. He said the results ‘have raised higher requirements for management, protection, and scientific research of our country’s cultural relics’.

Shan Jixiang told CWA, ‘We cannot shirk our responsibility. The Chinese Government has always attached great importance to the protection of our cultural heritage. In recent years we have made great progress and protective measures are constantly improving. With continuing efforts at home and abroad, they will continue to improve.’

But it is not just economic development that threatens China’s past: tomb-raiders, especially in more remote regions, are stealing to order for collectors at home and abroad. Theft from tombs is an occupation that has persisted for millennia but, according to Professor Lei Xingshan of Peking University, this is on the increase. ‘We used to say nine out of 10 tombs were empty because of tomb-raiding, but now it has become 9.5 out of 10,’ he said. His colleague Professor Wei Zheng, in a report printed in the Guardian early this year, said, ‘Before, China had a large number of valuable ancient tombs and although it was really depressing to see a tomb raided, it was still possible to run into a similar one in the future. Nowadays, too many have been destroyed. Once one is raided, it is really difficult to find a similar one.’

Almost every one of the 900 tombs Professor Lei Xingshan and his team found in one area of Shanxi province had been looted. ‘It is really devastating to see it happening. Archaeologists are now simply chasing after tomb-raiders,’ he said.

Police are cracking down on illegal trade in ancient artefacts, but it will be a tough fight: there is no doubt that the black market trade in stolen items is being fuelled by the economic boom, with collectors prepared to pay ever higher prices. Meanwhile, it is crucial that the strict rules regarding building control in areas of archaeological importance are scrupulously enforced before the relentless drive for profit destroys the country’s wealth of heritage.

The SACH survey is a wake-up call to the plight of China’s rich inheritance: once gone, it is lost forever. It is not just China’s loss, it is the world’s.