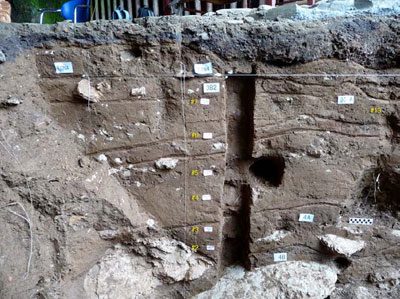 Fragments of 20,000-year-old pottery discovered in south-east China have pushed back the use of ceramics to 10,000 years before agriculture.
This shows that pottery was invented by mobile hunter-gatherers, rather than developing from the more settled lifestyles of early farmers, as was previously believed.

Found during excavations at Xianrendong Cave, the sherds are 2,000-3,000 years older than any pottery previously found, and date from the peak of the last glacial period, when climate change dramatically reduced regional food resources.

Many of these sherds show evidence of burning, suggesting that they may have been used for cooking – perhaps as people tried to acquire more nutrients in the cold climate.

Project leader Prof. Ofar Bar-Yosef of Harvard University told CWA: ‘Could the use of pottery pre-date these finds? With systematic excavations, we hope to find out when humans made pots and, critically, what they used them for.’