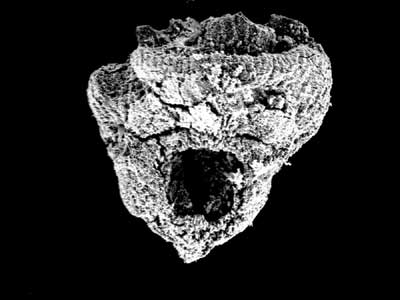 The precise date for the transition from wild to domesticated rice in China has been the subject of numerous studies in the last three years, with archaeologists in China favouring a date as early as 7000 BC, while Dorian Fuller and colleagues from the Institute of Archaeology, University College London, have proposed a later date of around 4000 BC, preceded by a long phase of pre-domestication foraging for wild rice, which, along with nuts, acorns and water-chestnuts, formed the staples of the Chinese pre-Neolithic diet.

Both sides have now come together to investigate the rich and well-stratified body of plant remains from Tianluoshan, in Zhejing province, part of the local Hemudu Neolithic culture that goes back 7,000 years. Crucial to the joint project was the ability to distinguish wild grains from domesticated ones. Grain size is helpful but ambiguous, as this can vary even among wild crops depending on the environment and climate in which they are grown. A more important trait for identifying rice domestication is that wild rice species disperse seeds freely at maturity, while cultivated rice grains do not. ‘The ‘non-seed shattering’ characteristic of cultivated rice makes it easier to harvest, but means it has to be threshed,’ explains Professor Qin Ling, of Beijing University, a member of the research team.

On this basis, researchers studying the plant remains separated the rice spikelets from Tianluoshan into three categories — wild, domestic, and immature — and measured the changing ratio of each over time. The results, published in Science magazine, pinpoint a 300-year period, from 6,900 to 6,600 years ago, when the process of rice domestication can be observed in action.

Over that time, rice rose steadily (from eight to 24 per cent) as a percentage of all the plant remains from the site, indicating that rice formed an increasingly important component of the diet. The proportion of non-shattering domesticated rice increased over the same period, from 27 to 39 per cent. Meanwhile wild types declined: at 4900 BC wild rice outnumbers domesticated, but by 4600 BC domesticated outnumbers wild. ‘What we are seeing,’ says Dorian Fuller, ‘is a point somewhere in the middle but towards the end of the domestication process, and a turning point when domesticated, non-shattering forms rise to dominance.’

Also found in the assemblage in increasing amounts were the remains of annual grasses, sedges and other arable weeds typical of cultivated rice fields. As studies of cereal domestication in other parts of the world have shown, it is likely that rice domestication took place over a protracted period, alongside the continued harvesting of wild rice. ‘Domestication probably took place over at least a 2,000-year period,’ says Dr Fuller, ‘but we don’t have a good handle on how much more, and just as obscure at present is the start of pre-domestication cultivation.’ •