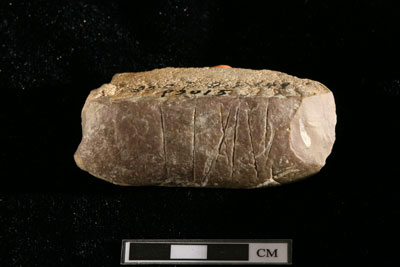 Archaeologists have identified a 30,000-year-old stone tool as China’s earliest-known engraved object – a key marker in the development of modern human behaviour. Found at Shuidonggou in the 1980s, the 68mm-long (2.7in) core’s significance was realised during recent analysis of the site’s stone assemblage by Professor Gao Xing and Dr Peng Fei from the Chinese Academy of Sciences. Under a digital microscope, one of the core’s surfaces shows eight incised lines which, the researchers say in Chinese Science Bulletin, were deliberately carved.

‘The straight shape of each line shows it was incised once over a short interval, implying the possibility of counting or recording,’ said Dr Peng.