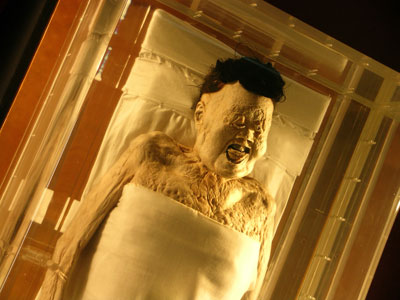 A few years ago, Steve Talley was a mature student of mine, with a tendency to turn up late for my lectures on Asian prehistory. It eventually transpired that he produced TV documentaries on archaeological topics, and, when he asked what I thought would be an interesting subject with a Chinese theme, I answered without hesitation: ‘Mawangdui’. I thought little more about it.

Several weeks passed, and I received a telephone call from the director of Natural History New Zealand (NHNZ) asking me to lunch. Over some excellent Sauvignon Blanc, he, Steve and I discussed Chinese heritage: the Great Wall, Xian (the world’s greatest city of ancient times), the Han tombs, the Terracotta Army, even the Leshan Giant Buddha of Sichuan Province. Then they asked: would I join Steve and his team to make a programme on Mawangdui? What an offer!

So it was that I found myself flying up to Hong Kong, and then on to Changsha. I soon found that making a television documentary was right up my street. Instead of lecturing to a few hundred, I was communicating with a world-wide audience of millions. Furthermore, I was met at the airport by a vivacious Chinese member of the team and taken to a five-star hotel – quite a contrast for someone who had lived in caves when digging. But, best of all, was my role as a pawn: when digging, I make decisions by the minute, in English and Thai; when filming, I watch and wait, and then do as I am told. It is really very relaxing.

But why did I suggest Mawangdui? For years, I had used this incredible site to illustrate the Han Dynasty attitude to
death and the afterlife. The Han elite believed it imperative to take with them
all their belongings for life in eternity – as did their predecessor, Xin Shihuangdi, the First Emperor, who took with him his soldiers, his menagerie, his travelling coach, and much more.

Mawangdui is a suburb of Changsha where, during the height of the Cold War, the Chinese burrowed into a hill to make an air-raid shelter. To their amazement, deep underground, they came across a structure of cypress wood. Archaeologists were called in, and they exposed a block of white, sticky clay. This covered half a metre of charcoal, within which was entombed a wooden building. On opening it, they encountered a series of chambers, one of which was the tomb of Xin Shui, Marchioness of Dai, a small state under the Han emperor that was ruled by her husband in the early 2nd century BC.

Between 1972 and 1974, the excavators aimed a floodlight into the life of Xin Shui. One chamber contained food: a tray with lacquered plates, dishes, chopsticks, and rice. Containers were opened to reveal stored food – eggs, birds, and even her favourite recipes. Another chamber contained her divan, walking stick, and a little stage supporting models of her musicians, dressed in silk. Her zither lay there, still strung with silk strings.

Then there was a room with sealed boxes, in which lay her clothes – including superb silk dresses, her slippers, and lacquered boxes for her cosmetics. But it was the central chamber that held the most remarkable find.

Three nested and tightly sealed lacquered wooden coffins were opened, to reveal layers of silk shrouds tightly enclosing the Marchioness herself. When these were peeled away, they revealed a perfectly preserved body. The deep and cold mortuary pit, together with the clay and charcoal enclosing the tomb, had kept out all moisture and halted decay in its tracks.

The authorities of the museum were more than co-operative: after closing to the public for the day, they allowed us to have free rein to do our filming. So, at about 6pm, the team set to work. I was told by Steve to stay well away from the room containing the body, so I took the opportunity to admire the displays of her clothes, lacquerware, and the incredible silken tomb banner that had covered the outer coffin. Its painted surface shows heaven in an upper panel and the land of the yellow springs, Hades, at the base. In the middle we see Xin Shui, a middle-aged aristocratic lady with her walking stick, accompanied by her servants. Two dragons give guidance to those intent on ascending to an eternal heaven.

I was then summoned, and with the cameras rolling, was asked to walk towards a rectangular wooden surround and look down into the reconstructed burial chamber. It was impossible not to register awe as I gazed down on the body of the aristocrat who had died over 2,000 years ago. She lay there serenely, eyes closed as if she had just gone to sleep. It was now about 10pm, and Steve positioned me so that the cameras could look down on me with Xin Shui in the background, and, for what seemed like hours, he fired questions at me. What was her life like? Did she have a large entourage? Describe her funeral rituals. Who made the silk and lacquer?

Then it was the turn of the pathologist who had conducted the autopsy. He described how, as a young doctor, he had been warned that any mistakes would be punished, and how, watched by a battery of top Communist officials, he had picked up his scalpel and proceeded. In his own words, ‘a young calf is not frightened of a tiger’.

There is a film record: we saw him tease her wig away from her real hair, and excise the top of the skull to remove the intact brain. He cut open her abdomen to take out her intestines. Red blood filled her arteries, and her flesh was still malleable, with no sign of rigor mortis. Her last meal had included musk melon, and the seeds in her stomach were only partially digested, so she must have died not long after a feast. She had suffered a heart attack following what must have been a painful attack of gallstones. Her stomach contained whipworms, and she suffered from schistosomiasis. In terms of health, she was overweight, and had partially blocked arteries.

It was in the early hours that, exhausted but stimulated, we returned to our hotel to sleep; but sleep for me was hard to come by, for my mind raced with images of a Han burial, the long train of carriages carrying the mortuary goods, the music and feasting, interment of the body in its deep pit, then the workmen covering the tomb with charcoal and clay after sealing the cypress wood ceiling.

The following morning, however, we were up and away to the burial site on the outskirts of Changsha. There we filmed the pit itself, and noted the two other mounds that covered the tombs of the Marquis, and that of their son. Unfortunately, these other two burial chambers had been damaged by water, but still retained another tomb banner, military maps, a large painting on silk of a military parade, and many historic texts.

The National Geographic programme came out with the title The Diva Mummy, and apparently attracted a large audience.

More recently, my son Tom, at Oxford, has been involved in making a documentary on another remarkable find: the possible bones of John the Baptist. A precious reliquary alabaster casket found in the foundations of a Bulgarian island monastery was found to contain some human bones. An inscription on the outside says: ‘God, save your servant Thomas. To St John. June 24’.

Tom went out to Bulgaria to drill tiny samples from each bone for AMS dating. The result? About AD 50. As he concluded in a news interview, dating can show that these are not the bones of the saint, but cannot prove that they are.