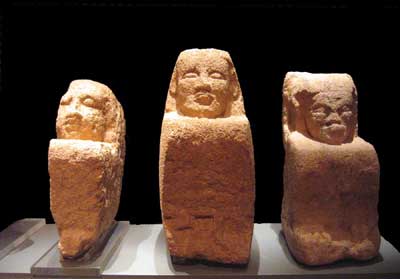 In the last issue of CWA we profiled the archaeology of Sudan, now readers have the chance to see this country’s wonderful heritage for themselves. From this September and running until the 9th of January 2005, the British Museum is hosting Sudan: Ancient Treasures.
This unique exhibition focuses on recent archaeological discoveries from Sudan, and all the items on display are loaned from the National Museum of Khartoum; many of these have never been on public display outside Sudan. The exhibition shows some of the finest Sudanese objects produced during all phases of human occupation, from the Palaeolithic through to the Islamic period (from 200,000 years ago, until the 19th century).
Of the exhibition’s many highlights, be sure to seek out the statue of Amenhotep I (right). The King’s statue is near life-size, seated on a throne with a rectangular pedestal. The sides of his throne are both finely decorated in sunk relief with an identical motif in the form of a lotus and papyrus; several hieroglyphs still bear the remains of blue pigment. But perhaps even more compelling is that the piece was broken into three parts and has only recently been reconstructed.
We also enjoyed these early 1st millennium AD Kushite (Meroitic) statues, shown below. The three slightly grumpy looking characters were among seven sandstone block statues found carefully hidden inside and near the Temple of Amun at Naga. Though the statues were probably fashioned in a local workshop, they are quite unlike the stylistic expression of Meroitic art as represented in relief and sculpture; nor do they find parallels in Egyptian or Hellenistic art. In fact, they appear far more related to West African sculptures. The statues show traces of rubbing, and it is likely that they were used in a ritual where the ground sandstone from the statues was produced for magical practices.
And just as this threesome illustrates, the exhibition is chock-full of unexpected and alluring items. From beautiful, abstract wooden Neolithic carvings of women, each with exaggerated buttocks, prized in Sudanese culture even today, to intricately painted 12th century Christian murals. There are even bodies (as above, right), and rather
Egyptian-esque art (right).
This loan exhibition would normally have had an admission charge, but in response to the current situation, the exhibition is free, with the BM instead asking for donations to be made to Oxfam and Save the Children, for their work in the region.
It was originally hoped that the exhibition would coincide with the signing of peace between the North and South of Sudan, but though this has not been the case, initial discussions have taken place to assist in the cultural reconstruction of the war-torn southern Sudan. And to highlight the country’s diversity and culture, the British Museum is also hosting a comprehensive programme of events, including gallery talks, a film session, study days and lectures that explore the region’s past and its present.
Added to this, the BM have devised a trail of its own extensive Sudanese collection. It takes the visitor through a variety of galleries, including the department of Ancient Egypt & Sudan and the department of Ethnicity. The trail, and indeed the fabulous and intriguing exhibition, comes highly recommended by CWA, though be sure to put aside several hours.