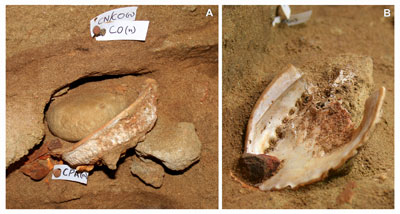 The discovery of two art toolkits, dating to 100,000 years ago, in a south African cave, show early humans were capable of sophisticated abstract thought and possessed a high level of technological know-how.

Two abalone shells containing an ochre-rich mixture – probably used for decoration, painting, and skin protection – were found at Blombos Cave in Capetown, South Africa. The finds, published in Science and now on display at the Iziko South African museum in Cape Town, were found close to each other and included ochre, bone, charcoal, grindstones, and hammerstones. The grinding and scraping of ochre to produce a powder for use as a pigment was common practice in Africa and the near East but usually dates to just after 100,000 years ago.

‘Ochre may have been applied with symbolic intent as decoration on bodies and clothing during the middle Stone Age. This discovery represents an important benchmark in the evolution of complex human cognition in that it shows humans had the conceptual ability to source, combine, and store substances that were then possibly used to enhance their social practices,’ explains Professor Christopher Henshilwood, Universities of Bergen and Witwatersrand, who, together with his international team, discovered a processing workshop in 2008 where a liquefied ochre- rich mixture was produced.

‘We believe that the manufacturing process involved the rubbing of pieces of ochre on quartzite slabs to produce a fine red powder. ochre chips were crushed with quartz, quartzite and silcrete hammerstones/grinders, and combined with heated, crushed mammal- bone, charcoal, stone chips, and a liquid, which was then introduced to the abalone shells and gently stirred.’

The quartz sediments in which the ochre containers were buried were dated using optically stimulated luminescence (osl) dating, and the results were consistent with the thermoluminescence dating of burnt lithics and the dating of calcium-carbonate concretions using uranium-series dating methods.

‘The recovery of these toolkits adds evidence for early technological and behavioural developments associated with humans, and documents their deliberate planning, production, and curation of pigmented compound and the use of containers. It also demonstrates that humans had an elementary knowledge of chemistry and the ability for long-term planning 100,000 years ago,’ concludes Henshilwood.