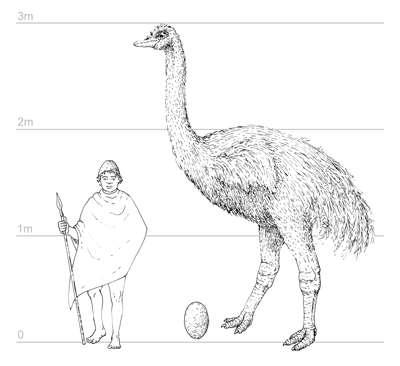 Until now the study of ancient DNA has been based on the challenging science of extracting genetic material from fossilised bone, but researchers from the Universities of Sheffield and Oxford in the UK, Australia’s Murdoch University and the University of Western Australia, New Zealand’s Canterbury and Otago Universities, Colorado University in the USA and Copenhagen University in Denmark have developed a new technique for extracting DNA from ancient eggshell.

The technique, published in the Proceedings of the Royal Society B, was developed using giant shells collected by archaeologist Mike Parker Pearson from excavated middens and from ancient nesting sites among the coastal dunes of southern Madagascar. Mike’s own research team is studying the chemical composition of the eggs to shed light on Madagascar’s past environments. An added bonus was the discovery that eggshell up to 19,000 years old is an excellent source of fossil DNA.

The eggshells of the now-extinct elephant bird (Aepyornis) were used as containers on Madagascar. Aepyornis was the world’s largest recorded bird. Resembling an ostrich, it stood nearly 3m high and weighed half a ton. Its eggs, also the largest bird eggs ever known, had a capacity of 11 litres (seven times that of an ostrich egg). The birds were already in decline by AD 1000, and human predation in the 11th to 13th centuries, when south Madagascar’s human populations flourished and grew on the basis of long-distance trade with Africa’s Swahili coast, the Persian Gulf and China, drove them to extinction.

Early French colonists described the birds as living in remote places and difficult to catch, but there are no records after 1650. Mike believes the elephant bird was probably the inspiration behind giant birds that Marco Polo wrote about in 1298, and of the ‘Roc’ that Sindbad the Sailor encounters in One Thousand and One Nights. The research team now plans to study eggshells from a number of archaeological sites in New Zealand to investigate how humans interacted with the giant moa bird, which was hunted to extinction 600 years ago.