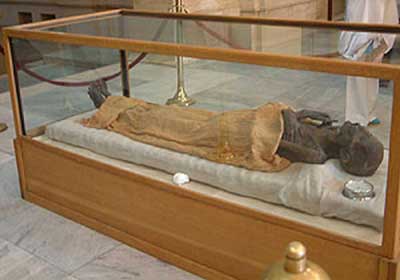 The mummy of Ramesses I, formerly held in Canada, and the lower part of the gloriously-decorated coffin ‘KV55’, previously on display in Germany, have been newly repatriated to Egypt. Their return is thanks to a fresh and important directive by Zahi Hawass, the Secretary General of Egypt’s Supreme Council of Antiquities.
When Hawass took Egypt’s top antiquities job at the beginning of 2002 (see CWA 2), high on his agenda was the introduction of new security measures to combat the theft and smuggling of Egyptian antiquities. To this end, he formed the Department of Stolen Artifacts, within which is Reclaim Department. Over the past two years, stolen artefacts have been returned to Egypt under the direction of the Reclaim Department. These have included statues from Karnak Temple, two Roman masks and a beautiful relief of King Amenhotep III. Of all the recent repatriations, perhaps the most exciting and high-profile are the mummy of Ramesses I, and the lower part of the coffin from KV55.
The mummy of Ramesses I (1295-1294 BC), grandfather of Egypt’s most famous king – Ramesses II – was repatriated to the Egyptian Museum of Antiquities, Cairo in November 2003. Currently, the mummy resides in the foyer in a sealed plexiglass case, however, he will soon be moved to his original sarcophagus and displayed in Luxor Museum, some 340 miles south of Cairo. It is thought that in 1871, the mummy was looted from Luxor’s Valley of the Kings, probably by a group of professional tomb-robbers, and sold to an Canadian antiquities dealer. Many suspect that it was taken from tomb DB320 in Deir el-Bahari, where a cache of other royal mummies was later discovered in 1881. This tomb had been systematically looted for many years previously by a family of looters.
At the beginning of the last century, the mummy turned up in Canada’s Niagra Falls Museum. It was only identified as a royal mummy in 1999, when German Egyptologist, Dr Arne Eggevrecht, visited the museum. A few months later Canada’s Michael C Carlos Museum (MCCM) bought the entire Egyptian collection of the Niagra Falls Museum, including the mummy. After three years of intensive investigation of the royal mummy, including X-ray, CAT Scan, radiocarbon dating, computer imaging and other techniques, scholars are 95% certain that this is the mummy of Ramesses I. The arms that lay crossed on the chest indicated that the mummy is indeed royal, for this position was reserved only for royal personages.
The director of the MCCM, Dr Bonnie Speed and her colleague Dr Peter Lacovara, curator of ancient art offered the mummy to Dr Hawass shortly after he had visited the museum to authenticate the claims of Dr Eggevrecht and negotiate its repatriation. The return of the mummy to the Cairo Museum was greeted by the Minister of Culture, the right honourable Farouk Hosni, a military band and hundreds of journalists, scholars and other well wishers.
The other item newly returned to the Cairo Museum is the bottom part, or basin, of the elaborately decorated coffin found in tomb KV55 in the Valley of the Kings. The top part of the coffin has been in the museum since its discovery by Theodore Davies in 1907. Tomb KV55 is at the centre of one of the most enigmatic stories in Egyptology. It contained the poorly preserved remains of a member of the Amarna royal family. The Amarna Period encompassed the reign of Akhenaten and his descendants, 1352 – 1327 BC (see CWA 1).
According to the tomb-decoration of KV55, it once belonged to the Great Royal Wife of King Amenhotep III, Queen Tiye, but when the coffin was excavated in 1907 the great royal lady was not interred therein. What was found was a rishi-coffin (a coffin covered in feather decoration imitating the wings of Horus protecting the dead) covered in gold foil and inlays of semi-precious stones along with other funerary equipment. The identity of this individual was the subject of much speculation, possible candidates including Akhenaten himself, or perhaps Akhenaten’s successor, Smenkhkara. It is now generally accepted as being the coffin of Smenkhkara, although opinions may change, especially if DNA testing becomes more reliable. The only other known Amarna period body definitely identified is that of the Boy King Tutankhamun, excavated from KV62 by Howard Carter in 1922. Egyptologists guess that in antiquity the mummy of Queen Tiye was removed for safe keeping to another tomb, possibly KV35, where some think the mummy of an Older Lady stored in an anti-chamber is Tiye.
The 1907 excavation of KV55 was poorly and brutally conducted, and valuable clues as to its history have been lost. For example, while the coffin and pieces of gold foil sheets and inlays were removed to the Cairo Museum, the wooden part of the basin was not conserved. Moreover, in order to transport the gold sheets more ‘easily’, the excavators folded many of them, and in the process made the hieroglyphic inscriptions hard to read. Of the golden sheets removed to the Cairo Museum, some belonged to the interior of the coffin lid, others to the interior and exterior of the basin. But between 1915 and 1931 most of the remaining elements of the coffin basin, such as pieces of gold foil sheets and inlays, disappeared from the museum, resurfacing eventually in Germany in the 1980s. These pieces of the coffin basin were restored on a plexiglass form at the State Collection of Egyptian Art in Munich.
The Cairo Museum of course wanted to reunite the coffin basin and lid, especially since the former had been illegally removed from its premises in the first place. Since 2000 intense negotiations for its repatriation have been underway and eventually in early 2002, after the Egyptian Government loaned the Munich Museum the coffin lid for an exhibition, the basin was repatriated. Now, for the first time, the coffin lid, basin and pieces of gold foil are now all reunited in the Egyptian Museum of Antiquities, where the coffin and other pieces from tomb KV55 are currently on display to the public.
For more information please see the Egyptian Cultural Heritage Organisation website: www.e-c-h-o.org.