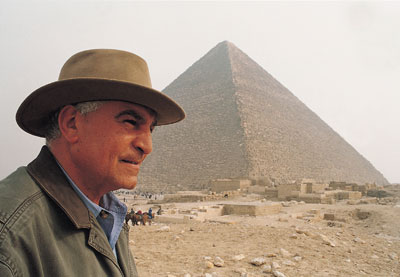 Egypt’s former Minister of State for Antiquities Affairs fell into archaeology by chance, yet it came to dominate his life. Dr Zahi Hawass talks to CWA about how he discovered his passion for his country’s rich heritage, and why it remains undiminished to this day.

Archaeology is my life: it is adventure, it is knowledge, it is revealing the secrets of the past. Yet, when I was young, I was not interested in it at all. In fact, I wanted to be a lawyer. But when I got to university, I found law boring. So, though I knew nothing about it, I began to study archaeology. When I graduated, I got a job in the Antiquities Department but it was a rather dull government job, and I was not convinced this was the career for me. Then I was sent on my first excavation. We found a tomb with a statue inside. I began to clean this statue with a brush, and suddenly I knew that I had found my passion: archaeology.

Though I have made many discoveries, the most important was the Valley of the Golden Mummies at Bahariya Oasis in 1996. It is a beautiful place, and we uncovered thousands of mummies covered with gold. We also made other major discoveries, such as the mummy of the queen Hatshepsut, the family of Tutankhamun. We have found out how Tutankhamun died, and that Ramesses III was murdered. Now I am looking for the mummy of Queen Nefertiti, wife of Akhenaten, who lived around 1370-1330 BC.

But the discovery that is closest to my heart is that of the tombs of the pyramid workers at Giza. It is unique because it tells us, for the first time, about the people who actually built the pyramids.

The pyramid was so much more than just a tomb, it represented the dignity and the power of the king. Look at Khufu, the builder of the Great Pyramid at Giza: he wanted to build something magnificent that people would talk about for all time. So he built the most fascinating tomb on Earth. We have investigated it and we have discovered three secret doors inside the pyramid. We came across the first door and sent in a robot that found a second door and a second tunnel. Beyond that we found a third door. I believe that Khufu’s burial chamber is still hidden, and maybe in the future we will be able to send in another robot to reveal what is behind those three doors. Perhaps then the secrets of Khufu’s pyramid finally will be revealed.

The first stone pyramid was built by Imhotep for King Djoser. He was the first on earth to use stone columns in architecture, and the Step Pyramid is the largest stone building to be built in its time. We are restoring it now. At Giza, we were able to find evidence for how the pyramid of Khufu was constructed. We found holes about 40cm (16in) in diameter made by the Egyptian to make an accurate square base. Then they dug into the solid rock to create the base that stood 9m (30ft) high. All the stones for building the core of the pyramid came from Giza, south of the Great Pyramid, and the ramp for their transportation was established on the south-east corner as a permanent feature.

At Abousir, we found scenes that show that the capstone was cased with electrum. It was the final architectural component to be added, and when it shone from the top, the pharaoh and the whole country celebrated the completion of the pyramid.

Secrets of the Sphinx

Ancient Egypt has a magic that no other civilisation has. But, in my opinion, the Pyramid of Khufu and the great Sphinx are part of our identity. We have to value them and keep them safe because they are unique to us. Many believe there are secrets hidden under the Sphinx and have asked me for permission to drill under it. But I have refused because it did not make any sense. Recently, however, we did bring in a machine to measure the level of the water table near and under the Sphinx, and we did drill underneath the left paw. We took photographs, and I can tell you that the Sphinx is a solid rock. Nothing is hidden underneath. But people like to dream.

However, there is an old tunnel at the top of the Sphinx that Howard Vyse found in 1881. He opened it – with dynamite! I have been inside it: it goes down for 5m (16ft 6in) but there is nothing there. There is also a tunnel in the tail. An old man, who was working for me at the time, told me that if I moved a stone from the Sphinx’s tail I would find a tunnel. So we did. And he was right. It goes about 15m (50ft) into the Sphinx, and was probably made in the Late Period by Ancient Egyptians.

When I was a young man, I met Sheikh Ali Abdel-Rasoul who found the tomb of Seti I in the Valley of the Kings. In 1960, he excavated about 100m (330ft) of a tunnel that he believed led to a hidden tomb of the pharaoh. But it became too dangerous, and the workmen refused to continue. Sheikh Ali asked me to excavate this tunnel when I became an important archaeologist. So, in 2007, I returned to it.

We went about 174.5m (573ft) but then reached a dead end. However, we did find out how the tunnel was designed, and we found hieroglyphic inscriptions and sketches for painted scenes. I believe Seti I wanted to build a tomb within a tomb but, as he ruled for just 12 years, he did not have long enough to finish it. His son Ramesses II, who ruled for 66 years, may have copied his father, which is why I believe the tomb of Ramesses II in the Valley of the Kings may contain another secret burial chamber inside it that has yet to be discovered.

If I could go back 4,500 years, I would ask Khufu himself what is hidden behind the doors inside the Great Pyramid. I want to end my career by revealing the secrets of those doors. We may try to send in another robot, either via the north-side tunnel, or perhaps the south-side tunnel. Finding out what lies behind those doors will be one of the most important discoveries in our history – and in the history of the world. I certainly believe there are more tombs of kings and queens yet to be discovered in the Valley of the Kings. As I always say: you never know what secrets hide beneath the sands of Egypt.