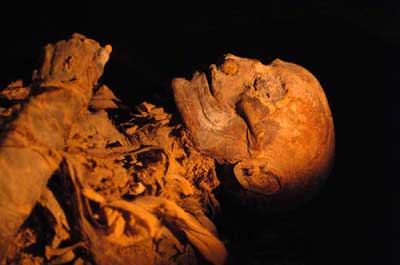 Why has a forgotten Egyptian mummy been touted as ‘Egyptology’s find of the century!’ in the world press? Because this is no ordinary forgotten mummy, it seems to be Egypt’s greatest female ruler: Queen Hatshepsut.

Hatshepsut, whose name means ‘Foremost of Noble Ladies’, was an 18th dynasty diva. She reigned in the 15th century BC – for longer than any other female ruler of an indigenous dynasty. She led a successful military campaign in Nubia and famously assumed the male trappings of power – she wore male clothing including the false beard of the pharaohs, and was addressed by male titles.

The whereabouts of the original iron lady has long been a mystery. Most of the other 18th dynasty royal mummies were moved away from their original tombs in the Valley of the Kings by the priests of the 21st dynasty who wanted to protect the mummies from desecration and tomb robberies. This cache of 40 displaced mummies was discovered in the 1870s by the Razzul brothers and moved to Cairo in 1881. However, Hatshepsut’s remains were seemingly not among them and it was feared that her mummy was lost – perhaps having been moved by her stepson Thutmose III, who, on succession, tried to destroy every trace of her reign.

However in June this year, a mummy from the Valley of the Kings’ Tomb KV60 was publicly identified as the lost queen. The mummy in question was in fact found in 1903 by Howard Carter.

Carter had discovered two mummies in the tomb. One was in a coffin, the second was stretched out on the floor. Since the tomb had been ransacked in antiquity, Carter thought it of marginal interest and resealed it. Nonetheless, in 1906 he re-opened it to remove the first mummy who was identified as Sit-ra, royal nurse of Hatshepsut. The second was left behind. It did not see the light again until 1990 when it spurred new interest. Speculation mounted that this unknown mummy was in fact Hatshepsut because its left arm was bent in a pose thought to mark royal burials and because it wore a wooden face-piece that might have been to fit a false beard – of the type worn by Queen Hatshepsut. All very interesting but all was speculation. However, events gathered pace following the recent discovery of a broken tooth in a wooden box associated with Hatshepsut. The tooth was found to exactly fit the jaw socket and a broken tooth root of the unidentified mummy. The mystery mummy could be ignored no more. Dr Angelique Corthals, a biomedical Egyptologist at The University of Manchester -together with Dr Yehia Gad and colleagues at the National Research Centre in Cairo – made a number of DNA tests on the body. The group then compared the DNA samples with those taken from Hatshepsut’s royal relatives – her grandmother Ahmose Nefertari, the matriarch of 18th dynasty royalty, and her father Thutmose I.

‘It can be difficult carrying out DNA testing on the royal mummies because of the many times the remains have been handled as well as the chemical processes of mummification,’ said Corthals. This is because the chemicals that preserve the appearance of the mummies can damage their DNA. Nonetheless her team was able to extract small amounts of genetic information from the areas of the mummies least affected by contamination. ‘When the DNA of the mystery mummy is compared with that of Hatshepsut’s ancestors, the preliminary results suggest a match between the two. We need to do a lot more work before we can confirm this with more confidence. However, we are thrilled with the results, and their implications’, she said.

The team is now planning to carry out more tests on the 40 remaining royal mummies, including that of Tutankhamun. Their work should help resolve the many burning questions surrounding the genealogy of the 18th and 19th dynasties.