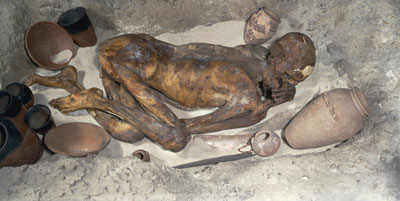 Another mummy recently identified as a victim of ancient Egyptian violence is Gebelein Man, one of the best-known occupants of the British Museum’s Early Egypt gallery. Found in 1896 at Gebelein, about 40km (25 miles) south of Thebes, the individual had been buried in a shallow pit, his crouched body wrapped in linen and matting. Although he died 5,500 years ago, Gebelein Man is one of the best-preserved ancient Egyptians ever found, his remains naturally mummified by the hot, dry sand. What was not known was how he died.

Now, 3D imaging has allowed researchers to examine the man’s muscles, bones, teeth, and organs for the first time, revealing not only that Gebelein Man was young when he died, aged between 18 and 20, but that a small cut over his left shoulderblade hides a penetrating wound, probably caused by a pointed weapon 1.5-2cm (0.6-0.8in) wide – possibly a copper blade.

CT scans show that the blow was struck with such force that it damaged his shoulderblade and shattered the rib immediately beneath, forcing bone fragments into surrounding muscle tissue and likely puncturing his lung. With no signs of healing, British Museum experts say, this injury was probably fatal, while a lack of other defensive wounds suggests that Gebelein Man may not even have seen it coming.

‘Unexpectedly, the 3D visualisation of the CT scan has confirmed that Gebelein Man was stabbed in the back,’ said Daniel Antoine, Curator of Physical Anthropology at the British Museum. ‘The analysis of ancient human remains rarely reveals the cause of death, but the cut on his back, as well as the damage to the underlying shoulderblade and rib, are characteristic of a single penetrating wound.’