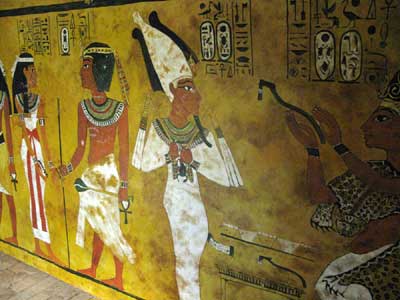 In 1922, Lord Carnarvon and Howard Carter discovered Tutankhamun’s tomb. Now, a splendid new exhibition on the Lord, his life, and legacy, is on show at Highclere Castle. Bob Partridge reports.

Eighty-seven years on, the discovery of the tomb of Tutankhamun remains the most spectacular archaeological discovery ever made in Egypt. The small tomb and its fabulous contents means that the name of Tutankhamun is known all around the world and his name will be forever linked to the names of the two people who made the discovery: Howard Carter and the Fifth Earl of Carnarvon.

Lord Carnarvon was an ill man and he had been advised by his doctors to spend the winters in a warm climate and, having chosen Egypt, he was not prepared (or indeed able) to spend his time doing nothing and needed to find something productive to keep him busy.

While Lord Carnarvon financed excavations in Egypt, working for many years with Howard Carter before the discovery of Tutankhamun, he was very much hands-on, actually helping with the excavation work, not just the rich patron overseeing operations from afar.

In his lifetime, Lord Carnarvon built up an impressive collection of Egyptian antiquities as a result of his excavations and by purchases in Egypt. In this he was helped by Carter who made sure he obtained only the very best pieces. Many objects found by the Earl were donated to the British Museum and also to Newbury Museum. After Lord Carnarvon’s untimely death in 1923, his collection was sold with many of the objects now being held by the Metropolitan Museum of Art in New York.

That might have been the end of the story, but in 1987 after the death of the Seventh Earl, some ancient Egyptian objects, long forgotten by the family, were found in a cupboard situated between two rooms at Highclere. This mini collection comprised a wide range of mostly small pieces, including objects from royal tombs.

These of artefacts, which aroused a lot of interest and publicity, were placed on display in a special exhibition in the basement of Highclere Castle when it was opened for the first time to the public. However, although the Egyptian display proved popular, it did not have the space to explain the role of the Fifth Earl in the discovery of Tutankhamun’s tomb, or indeed about all his other many and varied interests. The Fifth Earl was the first in the UK to drive a motor car, he encouraged early aviation, and was a talented photographer. Keen on sport, he built a golf course at Highclere and founded the now famous Highclere Stud, to indulge his passion for horse racing.

Following new ‘excavations’ in the basements of the castle, space has now been created for the current exhibition, which opened earlier this year.

The ancient Egyptian objects are now all displayed in new cases and with state of the art, low voltage and cool lighting, which shows the objects to their best advantage. The collection has been supplemented by objects discovered by the Fifth Earl that are on special loan from the British Museum.

The second part of the exhibition tells of the life of the Fifth Earl (occupation, as noted on his passport, ‘Peer of the Realm’). His many interests are illustrated with some fabulous archive and contemporary photographs and documents. His medicine chest is on display, along with his cameras. The Fifth Earl, despite his poor health, was clearly an energetic and active man and one who was fascinated by and very involved in the latest technology. Highclere Castle also played a role in the First World War, when it was used as a hospital for wounded soldiers and archive material from this period, too, is included.

The final part of the exhibition tells the story of the discovery of the tomb and succeeds in recreating the wonder and excitement experienced by the first people to enter it, Howard Carter, Lord Carnarvon and his daughter Lady Evelyn Herbert.

The first glimpse into the tomb is recreated in the first area, where visitors (of all sizes) can look through slots in a wall into the ‘tomb’ beyond, giving glimpses of gilded couches, thrones and statues. Several galleries follow where replicas of some of the main pieces from the tomb are on display. Some of the replicas are ‘stage prop’ quality, but others were bought in Egypt, many of these being adapted and aged by artists in the UK. The best of the replicas were specifically made in the UK, by artist Stuart Beilby in his studio in Cornwall. These include part of the fourth gilded shrine, a wonderful replica mummy of the king, complete with jewellery, a copy of the famous painted chest and a large wooden model boat.

The Highclere display is imaginative and novel and works well. Particularly impressive are the copies of the tomb paintings, made by artist Ellie Fane, who had never really encountered ancient Egyptian art before.

The overall display of the replicas and the excellent information panels tell the story of the discovery and explain both the importance and the role of some of the objects discovered, the originals of which, of course, can now be seen in the Egyptian Museum in Cairo (with some currently in touring exhibitions in the United States).

The collection—particularly the genuine objects on show—will be of great interest to anyone already fascinated by ancient Egypt; however, the exhibition as a whole is excellent and will, I have no doubt, be of huge interest and enjoyment to anyone new to the subject and will capture the imaginations of all— especially children.

To read more about Highclere Castle and the latest news on its exhibitions, visit www.highclerecastle.co.uk