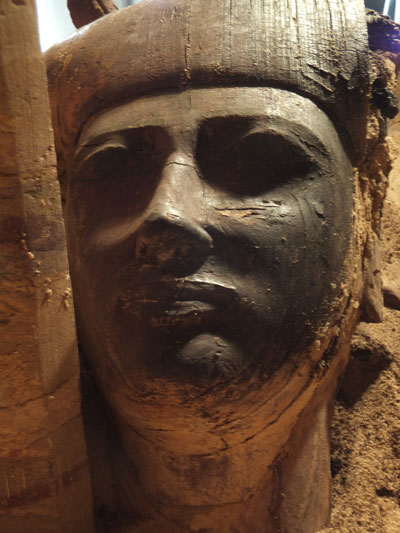 Archaeologists excavating an ancient Egyptian necropolis near Aswan have come face-to-face with a high-status official buried 3,500 years ago, after uncovering his finely carved wooden sarcophagus.

Elephantine (modern Qubbet el-Hawa) was a prestigious burial place for Egyptian nobles from c.2250 BC, with 40 tombs cut into its rocky cliffs. The research team, led by Professor Alejandro Jiménez Serrano of the University of Jaén, Spain, have been working on the site for four years, and since beginning a new digging season in January have discovered 20 mummies and a previously unknown tomb dating to c.1830 BC. It was while investigating the largest tomb in the necropolis that they found the remains of the high-status burial, possibly dating to the reign of Thutmosis III (c.1479-1425 BC).

Although the tomb had been plundered in antiquity and the coffin broken, its delicately carved face has survived intact. The material is thought to be pine, an expensive imported material from the Levant.

Professor Jiménez Serrano believes this suggests the burial belonged to an individual of considerable importance. He noted that: ‘Pine was mostly used by the ruling classes, and the carving was clearly done by high-quality craftsmen.’