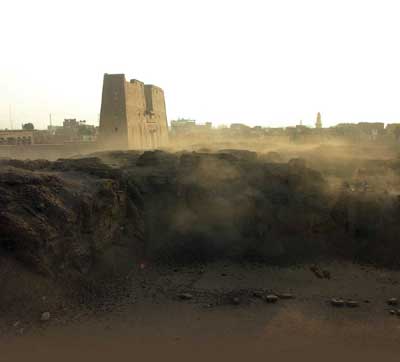 Early Egyptian silos: Our understanding of ordinary life in ancient Egypt has been boosted by the finding of early grain storage silos and a large administration building at Tell Edfu, in southern Egypt, by a team from the University of Chicago’s Oriental Institute led by Assistant Professor Nadine Moeller. The seven round mud-brick silos are ranged around a large courtyard of the 17th Dynasty (1630-1520 BC). With diameters of between 5.5m and 6.5m, they are the largest examples yet to be discovered within an ancient Egyptian town centre. Predating the silos was a mud-brick building with 16 wooden columns, dated by pottery and seal impressions found in the hall to the early 13th Dynasty (1773-1650 BC). The administrative building and silos were at the heart of the ancient community where the silos functioned as a bank (because grain was a form of currency) and as a food source.

‘The silos’ size indicates the community was apparently a prosperous urban centre,’ said Nadine Moeller. Gil Stein, Director of the Oriental Institute, said that, ‘the traditional view of ancient Egypt has been biased by the fact that most excavation work so far has focused on temples and tombs. The work at Edfu is important in that it finally allows us to examine ancient Egypt as an urban society. Nadine Moeller’s discovery of silos and local administrative buildings shows us how these cities actually functioned as places where the agricultural wealth of the Nile valley was mobilised for the state.’ •