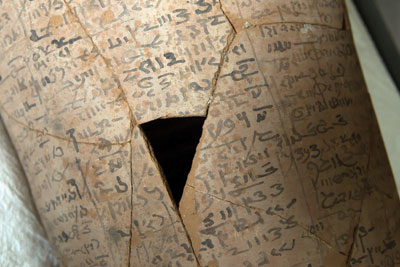 A 37-year project to compile a dictionary of Demotic – the language of ordinary ancient Egyptians – has been completed, opening a window on everyday life 2,500 years ago.

Taking its name from the Greek demos, or ‘common people’, Demotic was used between 500 BC-AD 500. Its flowing script was much faster and easier to write than hieroglyphs, making it ideal for business transactions, personal messages, and legal documents, as well as religious and scientific texts.

The script survives on papyri and sherds of pottery, but there are more unpublished texts in Demotic than any other phase of Ancient Egyptian. For almost four decades, experts from the University of Chicago have been collating tens of thousands of words – some of which are still in use today, including adobe, from the Egyptian word for ‘brick’, and hbyny, from which we get ‘ebony’, the dark wood traded down the Nile from Nubia. The personal name ‘Susan’ is also linked to the Egyptian word for lotus, s-sh-n, entering the English language via Hebrew.

‘Demotic is an indispensable tool for reconstructing the social, political, and cultural life of ancient Egypt during a fascinating period of history,’ said Prof. Janet Johnson, the dictionary’s editor. ‘The Chicago Demotic Dictionary provides the key to understanding the vast body of Demotic contracts, letters, tax records, and other documents. This allows us to hear the voices of the people who made up the majority of Egyptian society during the period when they were under first Greek and then Roman rule.’