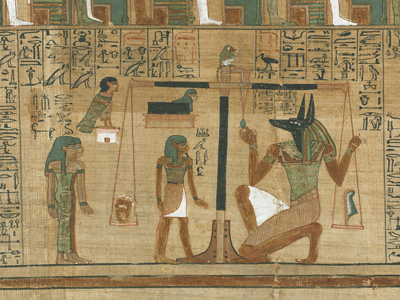 Ancient Egyptians believed death was survivable. Far from resting in peace, their demise catapulted them into a disorientating netherworld roamed by gods and demons. This marked the beginning of a new and dangerous journey. The ultimate goal was to enter the realm of the gods; but to reach this a spirit needed to negotiate the many trials, and terrors, of the netherworld. Ranging from the macabre to the outright bizarre, the newly deceased faced rotting, dying again, boiling in fire and even betrayal by their own heart.

Help was on hand, for those who could afford it, in the form of a supernatural survival guide: The Book of the Dead. Named before Champollion deciphered hierogylphs in 1822, these rolls were often found inside the coffins of high-status burials. Originally believed to be a religious doctrine comparable to the Bible, translation revealed that the papyri were really mortuary texts known as The Spells of Coming Forth by Day. They provided a handy compendium of spells to counter the worst the netherworld threw at you. Over 200 magical utterances are known, and these were selected on a pick and mix basis, so that no two Books are identical. The most popular spells would temporarily transform the spirit into hawks, crocodiles or snakes, and, essential for anyone who led a less than blameless life, stop your heart snitching on you. It is these fascinating manuscripts that form the centrepiece of the forthcoming British Museum exhibition.

The scrolls are more than mere texts. The vast majority were accompanied by lavish vignettes depicting pivotal moments in the deceased’s journey. Chief amongst these is the weighing of the heart. Believed by Ancient Egyptians to be the mind, this was the only major organ left in the body during the mummification process. The finest surviving example of this scene is in the Papyrus of Ani, named after an accounts scribe from Thebes committed to the hereafter around 1275 BC. The jackal-headed Anubis acts as guardian of the scales, while Thoth is poised to record the outcome, and Ani and his wife Tutu anxiously await their fate. This moment of judgement has an explicit moral dimension, with the heart balanced against truth and justice, symbolised by the feather of maat. If the heart is true, then Ani will proceed and be introduced to Osiris, but if not his spirit will be consumed by the grotesque crocodile-lion-hippo monster Ammit, literally ‘she who swallows the dead’. Acquired by the British Museum in 1888, the vignettes from Ani’s papyrus form one of the highlights of this exhibition.

Strangely for a document that conjures spells with magic words, rather more care went into the illustrations than the text. While the individual hieroglyphs are carefully drawn, the text can be garbled and abridged. It also reveals that the book was not commissioned by Ani, but drawn up on spec, leaving spaces where the eventual purchaser’s name could be inserted later. The scribe who finished the job was of indifferent quality and at times, incompetent, missing out Ani’s name on a number of occasions and, most humiliating of all, misspelling it in the critical scene where he is presented to Osiris.