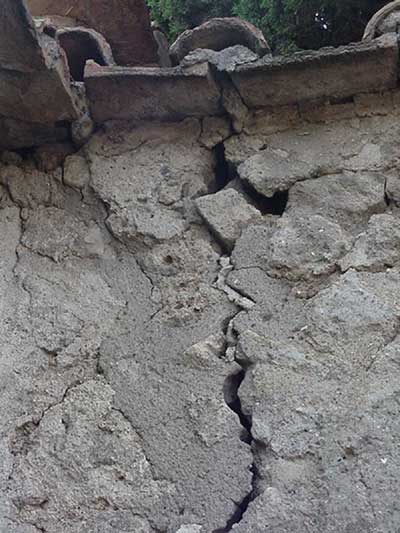 It’s ten years since I began work in Pompeii. Over that time the annual number of visitors has grown by a million, so that now about 2.5 million come each year. Why do so many come? When you walk along the streets lined with buildings destroyed in AD 79 you feel a chill reminder of your own mortality. Pompeii is also unusual among the great monuments of the world because here were once the homes of a complete living community, perhaps 12,000 people. Nowadays it’s a gentle walk of 25 minutes from one corner to the other. There’s a paradox: it was a small town, but it’s an enormous monument.

When you visit Pompeii, you find the bars and workshops of the humble alongside the mansions of the rich. Conserving the amazing wall paintings and mosaics presents difficult problems, but there are also real issues about how to treat the modest houses and shops. They may have no fine decoration, but they are an essential part of the complete city. If a wall in a bar falls down, the whole site is diminished.

Despite the daunting problems, there are positive new developments. The first decisive step came in 1997, when a special law was passed in Italy, giving the Soprintendenza Archaeologica di Pompeii an unprecedented financial autonomy. This meant that all the gate receipts are now kept and spent in Pompeii. The funds available for conservation and improving the experience of visitors have increased by roughly four times.

The current Soprintendente, Pier Giovanni Guzzo, has spearheaded these new initiatives. In the six years since the law was passed, progress is tangible. For the visitors, there are new signs, leaflets and itineraries, and an excellent audio guide system. Across the site there are programmes of conservation under way – such as in famous houses like the House of Menander and the House of the Vettii. However, even with the increased funds, the needs of this site are so great that some have despaired that it can ever be preserved. The Soprintendenza has long welcomed initiatives from outside to help their efforts, and now there is an increasing momentum of people coming forward to help.

In November 2003 an initiative from the World Monuments Fund and the Kress Foundation, both based in New York, sponsored a meeting in Pompeii that brought together a range of archaeologists, conservators, architects and other specialists to compare ideas and look forward to co-ordinating efforts and sharing best practice. This was an exciting occasion, revealing both the scale of the problems and the will to do something about them.
The experience of our own Pompeii Project illustrates the shift of attitude to look beyond academic research that’s now growing among Pompeian scholars. In the course of our decade of work, we’ve inevitably got to know every corner of our block, Insula VI, 1, and become painfully aware of the poor condition the masonry is now in. This is what happens after two centuries of exposure. In common with much of the site, exposed frescoes have deteriorated and protective roofs erected in the mid twentieth century are proving inadequate and are deteriorating themselves. When we complete our field research in 2006, we don’t want to just walk away and let the deterioration continue. At the same time we want to communicate our results to visitors. Our efforts have produced a fantastically complex story of the development of life in the block over four centuries, from the urban history to the toilets. This is a more richly textured account of ancient Pompeii than visitors get to learn at the site. During our field seasons, we provide multi-lingual guides to explain what we’re doing to visitors passing by, but we feel a strong responsibility to create a more permanent expression of what we’ve found out.

These aren’t separate aims, since the demands of conservation, communication and research are intimately connected. Before conservation work can be done, the monument must be documented. By communicating the results of research to the widest public, we ensure that people are excited by the importance of the site, and actively want to preserve it. So encouraging tourists is essential to the sustained future of Pompeii.

How do we support the Soprintendenza in these shared ambitions? Our own contribution is to establish The Pompeii Trust, registered as a UK charity in 2002 (www.pompeiitrust.org). It’s the first organisation in the world set up specifically to support conservation at Pompeii. We’ve commissioned a detailed conservation plan from London-based consultants Academy Projects, and are now working to raise money in the UK and the USA to implement our plans. But our initiative is by no means the only one. The World Monuments Fund and the Kress Foundation have made a major investment in plans for the House of the Silver Wedding. The University of Bologna has worked in the House of the Centenary. Meanwhile the Packard Humanities Institute and the British School at Rome have begun their significant programme at Herculaneum.

An international effort is beginning to build. There’s a growing recognition that Pompeii is such a special site that there’s an international responsibility pressing now on our generation to make it survive for the future. This has to be expressed through supporting the lead role of Pier Giovanni Guzzo and his colleagues in the Soprintendenza Archaeologica di Pompei. There is a successful parallel in Italy. More than 30 years ago international opinion was mobilised in the face of the threats to Venice. International committees were set up around the world. In Britain we have the Venice in Peril fund. They have contributed large sums to the efforts led by the Italian authorities. The time is right to do the same for Pompeii.

The last ten years in Pompeii have been an exciting time for archaeological research. Colleagues from many countries have produced new insights into Pompeii’s past, how it grew into the city destroyed in AD 79. There’s new hope that in the next ten years a co-ordinated international effort will begin to ensure its future.