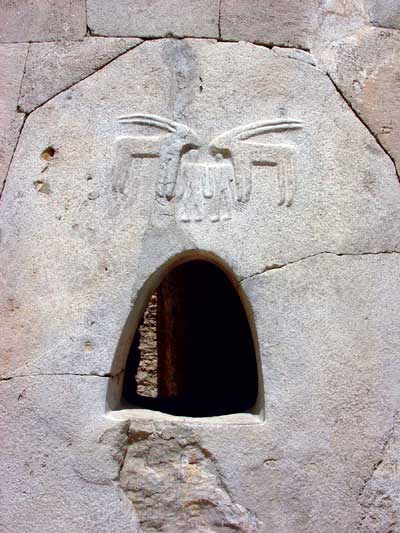 In the plane on the way to Abu Dhabi, a Geordie building developer leant over and explained in hushed conspiratorial tones ‘it’s like the American gold-rush, new buildings are going up at an unbelievable rate’. Certainly, over the past 30 years the city of Abu Dhabi, eponymous capital of the country, has gone from a one-horse town to a vibrant metropolis dominated by swathes of skyscrapers.

But what does all this oil-boom related development mean for the archaeology? Does anyone care about it or are they all too busy building more and building higher? Indeed, is there any archaeology in this traditionally nomadic country? And what is the situation in the other six emirates that make up the United Arab Emirates (UAE), a land which to all intents and purposes seems so very modern?

Of course, the initiated know that there is indeed archaeology to be found in the UAE: the Emirates comprise a large chunk of land that juts out into the warm seas of the Arabian Gulf and once lay astride the trade route between the mighty civilisations of Mesopotamia to its north and Pakistan’s Indus Valley civilisation to its East.

Once in Abu Dhabi city, our first point of contact was the indefatigable Dr Mark Beech, Senior Resident Archaeologist of the Abu Dhabi Islands Archaeological Survey (ADIAS). Over the past 15 years, ADIAS have been recording the ancient material culture from the 150 islands lying off-shore from the Emirate of Abu Dhabi. Among their projects was an excavation of a Christian monastery. Christians, I was surprised to learn, practised their faith here until sometime after the arrival and subsequent ascendancy of Islam in the 7th century.

ADIAS seem to have a knack of uncovering the unusual, and certainly for making headlines. In an ongoing project on the island of Marawah to the west of Abu Dhabi City, they are revealing the UAE’s oldest village (known as MR 11). Dating to the 6th millennium BC, they have already identified at least three stone-built multi-roomed structures, covering an area of 200m by 150m. At the end of one of these rooms there was a stone platform, where they found the UAE’s oldest skeleton: a man aged between 20 and 40 years old, who died 7500 years ago.

From a single skeleton on the island of Marawah to the discovery of hundreds of skeletons, our next stop was the inland area of Buhais in the neighbouring Emirate of Sharjah. We were guided around Buhais by its excavator Professor Hans-Peter Uerpmann of Germany’s Tübingen University. He and his team have uncovered a number of graves and hearths at Buhais, but no other settlement evidence, suggesting that here we have evidence of those ghosts of the archaeological record: nomads.

Of all the burials at Buhais, perhaps the most extraordinary is the mass mortuary pit, labelled BHS 18. The team estimates that around 1000 people were buried in the 15m by 8m and 2m deep pit. Associated carbon-14 dates span almost a whole millennium – from 5,100 to 4000 BC – demonstrating that people were burying here for a very long time indeed. Half are primary burials, while the other half are secondary burials. To Uerpmann, this suggests that half of the people died elsewhere, probably during the band’s seasonal circuit as they moved from resource to resource. Members of the group must have carried their dead kindred back to the cemetery on their return-circuit later in the year.

This image provides an evocative glimpse into the lives of the ancient nomads who moved through Buhais. We are drawn still closer to the Buhais nomads with the revelation that some of the bodies were arranged so that they held hands or touched one another in death – literally a touching insight to our distant forebears. All ages and both sexes are mixed together, suggesting this was an egalitarian society, at least in burial. They were relatively healthy too: analysis of the bones has shown a general absence of disease, with the oldest person living to around 60. However, not everything was blissful at Buhais. At some level, the nomads must have been experiencing hardship and uncertainty. It is likely that ever harsher environmental pressures were encouraging the people to bury with such verve.

Today, with the exception of one oasis, Buhais is characterised by sand and stone and few plants other than the occasional spiny shrub. But before the 5th millennium BC, the local environment was somewhat lusher than it is today, as is true for many of the desert areas now found in Arabia. However, the environment soon began to dry out, and by the 4th millennium the UAE became even more arid than today. This environmental deterioration is accompanied by scores of burials, including BHS 18. It seems that by burying, the nomads were staking ancestral claims over certain precious resources – in this case to a natural spring (now dry) located just near to the grave. And once the spring ceased to produce, it appears that the nomads ceased burying at BHS 18.

Though archaeologically compelling, there is little to see at BHS 18, since the grave pit has now been back-filled. Indeed, though a number of excellent museums exist in the UAE, the pervasive lack of temples or pillars or monumental buildings means that the Emirates have a hard task to use archaeological sites as a magnet for tourists, whose interests are instead spiked by the sun, the sand and the luxurious hotels.

Perhaps the only archaeological site in the UAE that has managed to become a tourist draw is that of Hili in the emirate of Abu Dhabi. There, two splendid 3rd millennium limestone monumental tombs (pictured right) have been turned into a visitor attraction, set within a landscaped park of emerald lawns and multicoloured flowers that glow neon in the bright sun. This makes for a stark contrast to the surrounding bleakly stony terrain of the rest of the Hili complex lying beyond the park. There, over an area of some 60 hectares are a swathe of 12 monumental circular graves and an attendant settlement. We were guided around these by the Director of the French Archaeological Mission in the UAE, Dr Sophie Méry.

Hili belongs to the Umm an Nar (or Mother of Fire) culture, named after an island near Abu Dhabi where similar burial evidence was first discovered. So important is this culture to the history of the region that a whole period has been named after it. The Umm an Nar Period (mid-late 3rd millennium) was a rich time for the UAE, something analogous to their current oil-boom. But in the Umm an Nar period, the local resource outsiders wanted was copper. Demand for this copper by people in the Indus Valley to the east and by Mesopotamia to the north brought a steady flow of wealth and foreign goods to the area. The Umm an Nar tombs at Hili seem to reflect this increasing wealth: over time, the tombs become ever-grander, ever more accomplished, and their building-blocks of stone ever larger. This was some feat since the stone was brought several kilometres from its source up in the mountains.

On site Sophie Méry drew our attention to the burial, Hili N, where she and her team have just finished the seventh season of investigation. Hili N, another mass pit-burial, is the only-known pit-grave at Hili. It was discovered just adjacent to one of the monumental tombs and dates to the late Umm an Nar period (2200-2000 BC). Its joint investigation by the French Archaeological Mission and the Department of Antiquities and Tourism in Abu Dhabi’s Eastern Region has been particularly rewarding since, unlike the burials marked by monumental cists, it was untouched by later robbers or others.

The Hili N pit-burial is judged to contain some 700 bodies (500 have been counted so far) and around 800 pottery vessels have been found. Most pots are local, apart from 10% which come from the Indus Valley and Mesopotamia, illustrating the continued contact with these major civilisations.

As for the skeletons lying in the pit, a detailed study has been undertaken. It has revealed that half died before adulthood, and a quarter at around birth. Most incurred accidental injuries before their 30s, notably broken limbs. Moreover, there were clear periods of malnutrition – deficiencies in iron, vitamin C and D are apparent, and many lost their teeth early – it seems they were rather partial to dates and the sugar rotted their teeth. Scientists have even adduced the frequent presence of a particular type of anaemia that still exists among the modern indigenous community.

Moving on through time, and back to Sharjah Emirate, we visited the early 1st millennium BC site of Muweilah, which is in its 10th year of excavation. Its erudite director, Professor Peter Magee from Bryn Mawr College in the USA, was just drawing the dig to a close. The locale is being rapidly encroached upon by development, but the area is under the protection of the local Sheik, Sultan bin-Monahhad al-Qassimi, who has turned it into a dedicated heritage area, a positive sign of local attitudes towards the past.

At Muweilah, C-14 determinations on date stones show the site persisted from 900 to 600 BC until its life was snubbed out by a fire. For the archaeologists this fire has effectively sealed the evidence, leaving a high degree of preservation of site architecture and artefacts. The excavations have revealed a well-off residential town, which may have gained its wealth thanks to its position on a trade route. There is a series of quite large public buildings, including a possible palace replete with a kitchen area and dining room. Impressive gates and a wall surround the site – though these seem more symbolic than protective. Some of the earliest evidence for domesticated camels has been found here, pointing to the start of the great camel caravans that later become an iconic symbol for Arabia.

On leaving the UAE, I was conscious of its wide range of archaeology, even if the sites are not comparable to the great tourist-draws of say Jordan, or even of the UAE’s near-neighbour, Yemen, with its temples, sanctuaries, and massive ancient architecture. However, relatively speaking, archaeology in the UAE, just like the sky-scraping building developments, has only just begun. n

With thanks to Ahmed Yousfi of Gaia Communications, Peter Hellyer of ADIAS, and the UAE Ministry of Information and Culture for organising this tour.