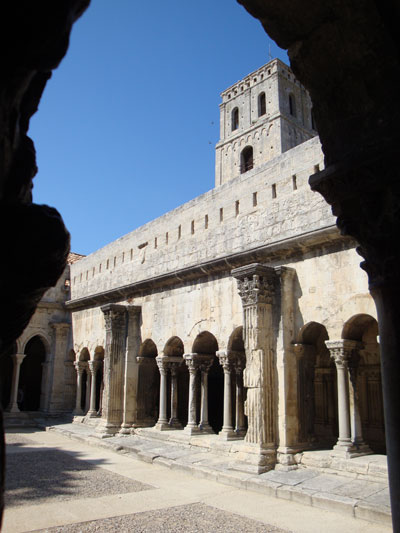 According to Oscar Wilde, ‘the only way to get rid of a temptation is to yield to it’. With the arrival this summer of a new direct train from London’s St Pancras to Avignon in France, the temptation to spend a few days in Provence was one not worth fighting.

But Avignon, temporary home of the popes for much of the 14th century, was not our destination. After a visit to the awe-inspiring Palais des Papes, with its majestic gothic arches and high towers, we headed a few miles further south, across Les Alpilles, to Arles.

Sitting on the banks of the Rhone, Arles is not only one of the prettiest cities one could possibly hope to visit, it is also bursting with Roman archaeology, all within easy walking distance. Wandering the narrow streets, lined with chic shops, cafes and bars, or ducking into one of the many delightful restaurants – tucked behind discreet doors that lead into private courtyards – to sample chilled rose or lavender-infused creme brulee, it is hard not to be enchanted by the place. And at every corner there are reminders of its long and distinguished past.

Arles was originally called Arelate by its 7th century BC Phoenician founders, its position on the river making it an ideal port for trading goods to and from the Mediterranean Sea. The Romans took over in the 2nd century, but it was not until the decline of the region’s main port, Marseilles – which had the misfortune to side with Pompey against his victorious rival Julius Caesar – that Arles grew in status. Today, the city is famed for its connection with Vincent Van Gogh, who spent a productive year here painting, among many other great works, The Night Café. It is also the proud bullfighting capital of France.

The great Roman amphitheatre that dominates the ancient town resounds to spectacle in the 21st century just as it did in times past. Traditional bullfighting feria are held here from Easter until September’s ‘Festival of Rice’ – Camargue is also a major rice-producing region. Throughout the season, the usual Camargue-style bullfight, when razeteurs simply irritate the bull by trying to cut off the ribbons tied to its horns, is replaced by the more brutal, yet more popular, Spanish corrida. The local people are fiercely proud of their tradition, and on the day of a fight, the city is filled with people from both the surrounding area and further afield. Stalls set up in the vicinity of the amphitheatre offer food, drink, and souvenirs, just as they would have done before the gladiatorial sparring of Roman times.

From the entrance into the old city via the hefty stone gates  that form part of the ramparts, a short walk up a slight incline leads straight to the Roman amphitheatre. It is a truly magnificent sight, both inside and out, and its high arches and elegant galleries belie its great bulk.