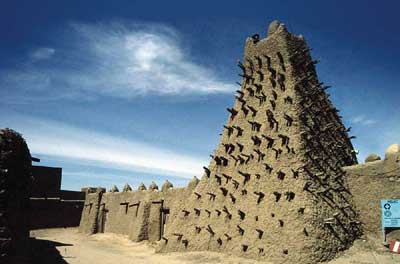 Prof. Tim Insoll of the University of Manchester is a specialist in African archaeology (www.Insoll.org). He undertook archaeological fieldwork in Timbuktu between 1996 and 1998. Here, he revisits the site in the hope that another archaeologist might take up the challenge of its investigation.

The city of Timbuktu, situated some 13km north of the River Niger in the West African country of Mali, is a fabled centre of trans-Saharan trade and as the site of an Islamic university founded perhaps as early as the late 13th century AD. However, its origins are obscure, and have been subjected to mythologising, as, perhaps, in the assertion that it was founded about AD 1100 by an old Berber or Tuareg nomad woman, Buktu or Bouctou – hence its name ‘Tim’ or ‘Tin-buktu’, ‘the place of Bouctou’. The legendary status of the city also meant that it was the focus of a race by European explorers in the 19th century to be the first to reach Timbuktu (and survive to tell the tale). Both the lure of the name and the fact that I had been working in the more important trading city of Gao nearby drew me to Timbuktu.

What work have you done at the city?

Our work (the project was a co-operative one with the Malians) essentially consisted of exploratory surveys and test excavations. This was a real challenge in a city that has been subjected both to flooding and regular sandstorms, meaning that archaeological deposits can be very deeply buried, with test trenches of 5m depth producing only material dating from the late 18th century onwards.

What one place should readers see in Timbuktu?

Be sure to visit the mosques of Djinguereber (c.13th century) and Sankore (c.1325-1433), which are both outstanding examples of the ‘Sudanese’ architectural style. But rather than focus on the monuments themselves, walk around the surrounding area and you will be surprised to see how many beads, tobacco pipe fragments, and pot sherds might be scattered on the ground (which I urge visitors to leave in situ!). This material is testimony to the complex history of the city, its invasions, and its trade.

…And what place should readers avoid at the site?

Treat with a pinch of salt the tales surrounding the small well next to the Timbuktu Museum, if it is still there, which is said to be the Well of Bouctou!

Which museum can readers visit to see more?

The Museum in Timbuktu is informative, if small. The National Museum in the capital, Bamako, is very good and introduces you to the overall history, archaeology, and cultural diversity of Mali.

What do you think might still be hidden at the site?

Much remains to be uncovered in Timbuktu. For instance, I would like to know: where is the palace said to have been linked with the rulers of the Kingdom of Mali who controlled the city between the AD 1325 and 1433?

It is a difficult place to work in at the time of year we were there, September. The temperatures are just too high, routinely 40 degrees plus, something that obviously does not come out in the pictures! And this in a place where we only had a bucket of lukewarm water to look forward to (rather than the desired freezing cold!) on our return from work each day.

What are your hopes for the future of the site?

The Director of the Cultural Mission in Timbuktu is doing a great job of protecting the standing monuments and I hope that an archaeologist will soon work at the site, thus building upon the limited work we completed there a decade ago.

What is your lasting memory of Timbuktu?

My lasting memory of Timbuktu is the peace and quiet of the city. Walking around the lanes and encountering very few people, and sitting on the verandah of the Bouctou Bar watching the sun go down with a beer!