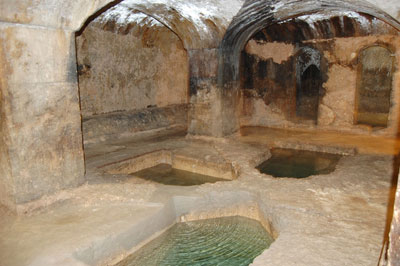 The city of Siracusa (ancient Syracuse) is famous for its magnificent Classical buildings, including the Temple of Athena, Castello Eurialo and the Altar of Hieron II. What few people know is that this sun-drenched city is matched by an equally impressive one below ground, hidden away in the cool darkness. Tunnels, chambers, chapels, and galleries riddle the soft limestone rock under Siracusa and comprise the second most extensive and important system of ancient catacombs in the whole of Italy, after Rome itself.

In decades past they were inaccessible or easily overlooked as the various entrances were often closed. The catacombs themselves were in a poor state of repair and good descriptions of them are practically non-existent. This has now changed. A long programme of restoration and repair is nearly complete and parts of all the subterranean complexes have now been reopened to the public. Finally, the catacombs can take their rightful place as one of the most important and atmospheric experiences that Siracusa has to offer the interested traveller.

Part of their interest lies in their sheer size. It is fascinating to imagine, while strolling around the city, how much of the apparently solid ground beneath your feet might actually be cut through with dark twisting tunnels and tombs. In fact, the catacombs are so extensive and so much damage has been caused to them by illegal building and rising water levels that the archaeologists have still not charted their full extent in spite of working on them for over a century! Some locals, who were forced as children to use the catacombs of Santa Lucia as a WW II air-raid shelter, remember that there was a route out to the sea, but no-one has since been able to trace this path. This highlights another aspect of their charm: the thrill of potential new discoveries. Even though they have been investigated for so long, new features are constantly being brought to light and it will be possible for excavations to continue for many more decades to come.

For me, the major draw is quite simply their quiet and dignified beauty, which is perfectly accentuated by the atmospheric lighting that has been installed along their accessible sections. The cool, damp air; the sound of water dripping in the distance; the occasional shafts of sunlight breaking through from old ceiling collapses or well-shafts; and, above all, the thousands of tombs spreading out in all directions, in various shapes and sizes, some of which still retain their original painted decorations or elaborate carvings. This is the ultimate source of their fascination: the possibility of exploring the venerable resting places and mortuary chapels of countless generations of inhabitants of this great city, replete with the faded (and not so faded) brilliance of their funerary art.

Why are there so many catacomb complexes here in Siracusa and why are they so extensive? The simple answer is that the rock here is extremely easy to work. The various generations, starting with the Ancient Greeks in the 5th to 3rd centuries BC, were easily able to dig down into it when building their water management systems. Over time, they dug numerous wells and cisterns, and amplified and redirected a series of natural subterranean aqueducts to bring water directly to their city. When the early Christian community of Siracusa was searching for a discreet place to bury their dead with reverence and respect, these underground chambers were a natural choice. Over the first three centuries AD they expanded upon the pre-existing chambers and galleries, and this subterranean world developed. Once Christianity had become the dominant religion in the Roman Empire, the catacombs became the principal cemeteries of the entire city, being most heavily used between the 4th and 6th centuries AD.

I first encountered this subterranean world while teaching Ancient History at an American university in Siracusa (the Mediterranean Centre for Arts and Sciences). I taught my courses on-site whenever possible: in the temples when discussing religion; looking out over the great harbour when dealing with the topography of the Athenian siege of Syracuse; in the catacombs when talking about Christianity and death. The underground tours were one of my students’ favourites and, as more of the catacombs were reopened, the tours I led beneath ground increased in scope. When I left academia to take up my current job in archaeological tourism, I was determined to put this unusual and eerie side of Siracusa more firmly on the map. Many of these sites are not discussed in the principal archaeological guidebooks (e.g. the Blue Guide: Sicily), as they have been closed to the public for so long. So, what better way to bring them to the attention of the interested traveller than a detailed unveiling in Current World Archaeology?