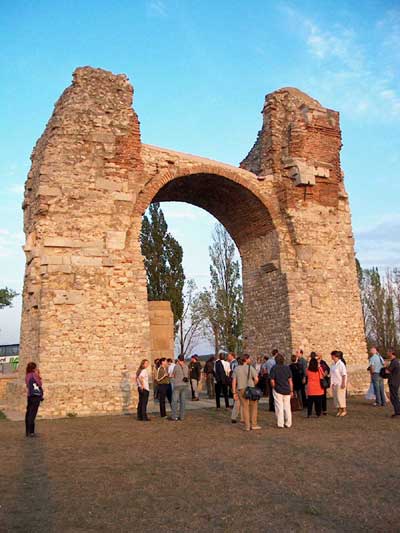 It is now over 50 years ago that the International Congress of Roman Frontier Studies was founded by Eric Birley. Since then Congresses have been held at places along the whole frontier from the Atlantic Ocean to the Black Sea, and in the Middle East. This year the conference, which is held every three years, met in Hungary, the Roman Pannonia. The Congress traditionally mixes lectures and tours so that individual stretches of the frontier can be inspected at first hand. This year was no exception. In total, the Congress and its pre-Congress tour, visited the whole of the Danube frontier from Vienna to Ilok, travelling through four countries – Austria, Slovakia, Hungary and Croatia – as well as crossing the river to see sites in ‘free Sarmatia’.

It is impossible to understand a Roman frontier properly – or indeed any archaeological site – without a visit. Standing on the banks of the Danube looking out at the vastness of the Great Hungarian Plain, one understood the Roman army’s problems – and solutions – a little better. Furthermore, Hungary offers a vital piece of evidence to aid our understanding, for in the splendid new displays in the National Museum is an inscription dating to the reign of the Emperor Commodus (180-92) recording the construction of towers to prevent the incursions of brigands.

These visits also helped focus discussion. One of the session themes was, how did Roman frontiers actually work? Were Roman frontiers ‘open’ or ‘closed’ during much of their lives? Were they essentially defensive in intent rather than being erected to aid frontier control? What was the value of rivers as frontiers? Standing on the site of the fort at Lugio and looking eastward across the Danube to the remains of the fourth-century fort at Contra Florentian we were reminded that for most of the life of the empire there were no bridges across the great rivers which formed the boundaries of the empire and very few forts on the far banks. What did this mean for cross-border relations?

The relationship between the Romans and their northern neighbours can be explored to singular advantage in the middle Danube region in view of the considerable amount of high quality archaeological fieldwork. The quantity of finds beyond the frontier have led archaeologists here to the view that there was considerable cross-border activity. This is in contrast to the conclusions reached on the basis of the new study of artefacts found in ‘free Germany’. There, it is argued that the frontiers were generally ‘closed’. Perhaps different frontiers operated in different ways. Now there is a novel way of viewing the Roman empire: it was not a monolithic structure operating in the same way everywhere!

The Congress of Roman Frontier Studies was organised by Professor Zsolt Visy and held in the delightful city of Pecs, where the early Christian tombs form a World Heritage Site. The Congress was preceded by the 14th Roman Military Equipment Conference in Vienna, another World Heritage Site, organised by Sonja Jilek. This conference explored a single theme: The Archaeology of Battlefields, militaria from destruction levels. The papers, however, were more wide ranging than the title might suggest. Material from all kinds of destruction deposits were examined. Natural disasters have produced well-dated deposits of arms and armour at Pompeii and Herculaneum. The effect of flooding, earthquakes and lightning were all considered.

When it came to military action there was an immediate problem – battlefields are notoriously hard to locate and much ink has been spilt trying to prove the site of many battles. But the title was literally interpreted, attacks on frontiers being brought within the framework of the conference. Yet even here we no longer walk on firm ground. The evidence so readily interpreted in the past for the destruction of frontiers by the enemy has more recently been interpreted in different ways. Hostile action is but one of a suit of possibilities including repair, rebuilding or abandonment of forts by the army itself, accidental burning as well as the debris of hearths and ovens. The discovery of a major destruction level within the fort at South Shields, by the eastern end of Hadrian’s Wall, led to a conference in 2001 when, even with the help of a fireman, it was not possible to reach a firm conclusion on the reason for the destruction, though the participants ended the day being much wiser about the mechanism of fire.

Finally, we cannot leave central Europe without a word about Hungarian and Austrian (and Croatian and Slovakian) hospitality. Throughout our sojourn we were warmly welcomed everywhere. Highlights included dinner in a ship on the Danube, a reception in the Habsburg fortress in Komarno and a visit to the wine cellars at Ilok. Nor was music forgotten, and all were enchanted by the rendition of medieval and more modern music at the opening and closing ceremonies of the Congress. Vienna took good care of its visitors too. The Austrian Academy of Sciences provided an excellent venue and, together with the Museum of the History of Vienna and the Kunsthistorisches Museum, receptions for the delegates. Oh, and the sun shone.

The next meeting of the Congress of Roman Frontier Studies will be in 2006 when we will consider an internal frontier in Spain and where there will be an opportunity to visit the late Roman defences and the Republican siege works at Numantia. Meanwhile the Roman Military Equipment Conference will re-assemble in Budapest in 2005.