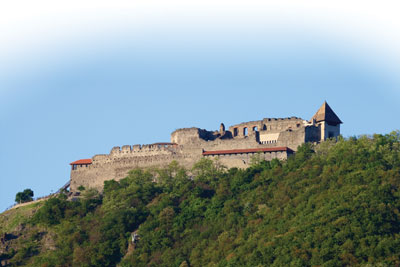 Forty minutes north of Budapest, on a bend in the Danube, occupying a strategic point on its western side, lies Visegrád. In Roman times, this was a heavily fortified stretch of the Pannonian limes, controlling some of the richest farming land in Europe. Today, though, its real fascination lies in how Hungary’s smallest town became a royal stronghold for the Hungarian royalty and then, since the 1930s, a symbol of Hungary’s Medieval and Renaissance monumental might in the heart of Europe. On a magical autumnal day in November, following a two-day conference in Budapest, I had the good fortune to visit Visegrád with Professor József Laszlovszky and his new cohort of MA students (in Medieval Studies) from the Central European University.

Visegrád lies in the shadow of Budapest in most respects. Their relationship to the Danube as a great axiomatic line connecting and separating Europe underscores about every episode in their common histories up until our times, the age of cultural tourism. So, as I shall explain, the great castle of Buda that dominates Hungary’s capital is a textbook example of artful restoration and a benchmark for the equally extraordinarily audacious restoration at Visegrád. Largely obliterated in the ferocious battle for Budapest in December 1944, post-war governments have skilfully reinvented the Medieval character of this Danubian castle.

More accurately, establishing a genesis for the Austro-Hungarian city following the steady loss since 1918 of much of Greater Hungary’s once far-flung territories has been an important task for generations of the country’s dedicated archaeologists and conservators. Not surprisingly, then, this Medieval fortress, rightly celebrated today, draws huge numbers of tourists. Wonder at Buda as you may, gazing from the formidable eyrie on the 19th-century city below, but as a feat in shaping a historical story Buda actually pales in comparison to Visegrád, where – among the constellation of monuments – you will find a thought-provoking early Renaissance Pompeii.

Majestic setting
Visegrád was first mentioned in a royal charter of 1009. Here Hungarian kings came to hunt in the rolling hill-country that occupies this corner of the Danube, today a wooded national park criss-crossed by trails. József has carefully planned the order of our visit. We begin at the top, close to the upper citadel belonging to this small town, from where the entire landscape can be viewed.

Of course, the listless Danube in its huge setting draws one’s eye, but then there is the 13th-century upper castle, contrived to belong to a Grand Tourist’s lithograph. Its crenellated battlements and turrets, evocatively restored as if for a film, command the river as it narrows through the wooded hills before it turns towards Budapest. Countless Romantic images depict it, a place of wild middle European Medieval royals, on a great fluvial highway connecting the west to the east. The modern restoration, like fortress Buda, naturally draws coachloads to its dark fastness. But its history was marginal in the annals of Visegrád.

On a lower ledge, immediately below the citadel, is its precursor, and lower still, out on a point, is the Tower of Solomon, another Romantic viewshed. The precursor on Sibrik Hill between the two textbook castles is no more than a few stone courses high. This unrestored castle was a well-placed 4th-century Roman fortress, parts of which, recent excavations have shown, were maintained until the 12th century.

Being the remains of an imperial interloper, aimed at keeping the menacing Germans and Huns bottled up on the east bank of the Danube in the Migration Period, there has been no attempt to rebuild the camp. But its place in Visegrád’s history has not been entirely forgotten. On the millennial anniversary of the first reference to the township, in 2009, with a sketchy allusion to an 11th-century prisoner held here, the modern followers of the Knights of St George chose this undistinguished fortress to erect a Disneyesque monument: a broadsword sunken into a deep stone.

Gazing at this brazen historical statement, as if by magic, military drums strike up in the Tower of Solomon below. Knights are jousting, József tells us with a twinkle in his eye, their enthusiastic and guttural cries travelling fast across the misty autumnal woodland. Following the path downwards, passing through its upper gatehouse we reach the source of the jousting, a much-restored 13th-century tower. With walls 5m (16ft) wide, this keep occupies the lowest concealed ledge directly below the citadel. Here, brightly attired, melodramatically, the busy knights are being put through martial paces: capacity building in perfecting their archery, throwing knives, and other everyday Medieval skills.

The tower was erected with the overt purpose of enjoying the pleasure of this Danubian panorama. Its riverside rooms were graced with high windows, worthy of a late Romanesque cathedral. Not surprisingly, this bastion was a magnet to a series of sieges culminating in 1544 with an Ottoman raid that caused part of it to collapse. That accounts for perhaps the most unexpected restoration I have ever encountered. Its Medieval features are capped, so-to-speak, by a remodelling of its uppermost floors made in Communist times.

To repurpose the tower for popular effect, concrete has been deployed: onto the Romanesque has been grafted Cold War bunker architecture. Unfortunately, concrete rots – unlike the masterful stonework of the Medieval architect. Twenty years from now, this conundrum will provide the Hungarian authorities with a baffling and expensive challenge if Solomon’s tower is to be maintained for modern knights and tourists.