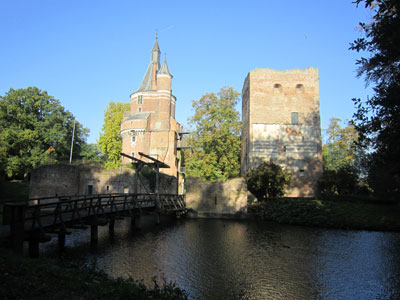 Troy is not a place one normally associates with Holland. Yet the Dutch claim to have their own version: Dorestad. It lies at the point where the Rhine parts company with the river Lek, about 100km south-east of Amsterdam, near the picturesque town of Wijk bij Duurestede. It may not attract many visitors these days, but it is the site of one of Europe’s greatest towns, a place closely associated with the very making of Europe.

Today, Wijk bij Duurestede is a dormitory town for nearby Utrecht. It has a fine Romanesque castle, majestically built in brick, and a walled late Medieval centre dominated by an early Baroque church. Like many Dutch towns, everything about it is well appointed: flower baskets grace many of the cobbled streets, and the older houses have been discreetly restored. But this unassuming country town has a history worthy of Homer’s Troy.

Its modern history began in the mid 19th century when some of its citizens were starving. As a last resort, a few of them turned to digging up bone pits in their gardens that they knew to date back to ancient times. The remains of animals butchered more than 1,000 years earlier were boiled to make the thinnest broths. With the bones came a plethora of artefacts, including coins, breathing fresh life into the sketchy history of a huge riverside mart that was formerly home to Frisian merchants. The discoveries gained added significance when historians of the Low Countries late in the 19th century identified these Argonauts of the North Sea as the first Medieval merchant-venturers.

From the 7th to the 9th centuries, as Europe was evolving to take on its familiar Medieval and modern configurations, the Frisian diaspora managed a triangular trading zone between the German rivers, Anglo-Saxon England, and the western Baltic. Operating out of Dorestad, these merchants fuelled an appetite for Anglo-Saxon woollens and Scandinavian furs in Charlemagne’s empire, and fed it with German manufactured goods made in Rhineland factory villages. So started a relationship with the Rhineland that still accounts for much of the wealth in the Netherlands.

Revealing a Dutch Troy
The first excavations at Dorestad were led by J H Holwerda, in 1922, establishing that the Frisian artefacts belonged to large riverside properties. These discoveries were trumpeted by the historians of the time as proof of the rise of Charlemagne’s Europe and its bold entrepreneurs. It is difficult today to grasp the significance of this: perhaps the simplest illustration is that, as the Netherlands fell to the Nazi invaders in May 1940, SS officer and archaeologist Herbert Jankuhn breathlessly attempted to revive the excavations. Such was Dorestad’s perceived importance to Dutch psyche that its parliament, notwithstanding the blitzkrieg and the mayhem caused by the invasion, caucused to prevent Jankuhn’s initiative… and succeeded in doing so. Protected by river silts, Dorestad survived for another era.

Dorestad was reborn in the modern age thanks to the young director of the Dutch State Archaeological Service, Wim van Es. Faced with a plan for a gigantic housing development scheme at Wijk bij Duurstede, growing the village of 3,500 to 25,000 inhabitants, this brilliant archaeologist mustered his forces to run one of the largest excavations of the modern age.

Between 1967-1978, working with machinery and a small year-round team, van Es decided not to salvage a small portion of the ground given over to the new dwellings, but instead to uncover a staggering 55 hectares. As a result, for the first time, the topography of an early Medieval emporium was unearthed. A Babylonian wealth of finds was now complemented by an understanding of the town plan of this Frisian capital. The Dutch Troy had been given real definition.

These stupendous excavations showed that the river had moved, leaving the old town to the archaeologists. The Dorestad that emerged comprised a line of wooden jetties supported by timber piles, beyond which lay a thin ribbon of riverside buildings. Set back from this meandering port was a nucleus of major farm buildings, each occupying its own fenced enclosure. Apart from the massive bow-shaped timber and thatched dwellings, typical of farms in the Rhine delta region, each household possessed one or more wells constructed using stave-made barrels produced from timber from the southern Rhineland.

Van Es put Dorestad on the map. I visited him many times in the 1970s, thrilled by his capacity for bringing the Dark Ages and the world of Charlemagne and King Offa to light. My involvement went deeper: in 1977 he examined my thesis and invited me to publish a major essay in the Dutch state journal; and then, in 1979, we made a BBC Radio 4 programme in the little site museum. His capacity as a place-maker, bringing to life the lost metropolis known in the Middle Ages as Vicus Famosus, was inspiring. Thanks to his single-minded efforts, Dorestad has become the cornerstone of early Medieval archaeology north of the Alps.

The Odyssee Project
But Dorestad lives on. A new project to assemble all the past excavated material digitally has been accompanied by a new excavation. Called the Odyssee Project, the circumstances in Wijk bij Duurstede could not be more different from the phenomenal salvage drive by van Es. On a glorious early autumnal day, we met with the team and local officials in the town hall where everyone, naturally, speaks fluent English. Then, led by Wilfreid Hessing, a veteran of van Es’s project and the mastermind of Odyssee, we walked across the ground once covered by the old fruit and vegetable market – the Veilingterrein – an area of nearly 4ha recently excavated by Juke Dijkstra and Gavin Williams. As we ambled on, I quizzed my companions about the controversial history of van Es’s dig: the developers were mightily miffed by the archaeologists who delayed the housing construction. On we continued through leafy lanes beside well-tended back yards to the riverside, where, on the far side, a Roman fort secured the delta and served as the nucleus from which a 7th- to 9th-century administrator controlled the customs dues for all who traded along the jetties. These were people like Ibbo, who in the 9th century sailed with four boats from Trier to England, passing through Dorestad. On we strolled to the towering Romanesque donjon, before turning back into the walled town to attend a round-table briefing session in a hall. Here I was treated to two hours on the recent discoveries: once more I was thrilled by the sheer scale of the archaeology and its international and historical reach.

The Veilingterrein area was excavated between 2007-2008. With time to work carefully, a strategy radically different to van Es’s was employed. Where he had been compelled to machine away much to obtain the basic elements of the town, Dijkstra and Williams with their team were encouraged to go more slowly. Not surprisingly, a more nuanced picture of Frisian townlife has emerged.

Putting the record straight
Two results stand out. First, this inner sector of the metropolis was occupied by three farms in their grand compounds from the foundation of Dorestad in the late 7th century until the later 8th century. This insula of Dorestad was then refashioned as seven dwellings, most of which were associated with crafts of one kind or another. Dorestad plainly prospered as Charlemagne’s renaissance within his empire created a huge demand for imported materials.

Second, the great quantity of finds produced by van Es’s excavations were dwarfed by these more controlled excavations. Perhaps the most astonishing discovery was the 40 Carolingian coins, minted by Charlemagne and his son – many at Dorestad, with a signature boat motif. This first ‘euro’ (agreed at the Council of Frankfurt in AD 793) was plainly as popular as its modern iteration, being imitated directly in Denmark by Viking communities and as far south as Benevento in southern Italy (though the English opted out of an exact imitation…).

The many lost coins in this backstreet of craftsmen at Dorestad shows that the Frisian traders were eager proponents of an unified monetary economy! Of course, this euro Mark I failed as the Vikings descended upon north-west Europe, though many might say that political squabbling really caused its downfall. Whatever, these new excavations complement van Es’s mammoth digs and together tell an arresting story pertinent to our troubled times.

According to the historical stories, Dorestad, like Troy, fell victim to outsiders: Viking marauders – rather than Homeric warriors in search of Helen. But the excavations, well-dated by dendrochronology (the dating of the tree rings) together with the myriad coins, show that this mighty mercantile engine faltered and suddenly declined before the Vikings arrived. Had demand in post-Charlemagne Germany suddenly dried up? Was the market for Carolingian goods in Anglo-Saxon England saturated? The debate continues, but today with incontrovertible evidence.