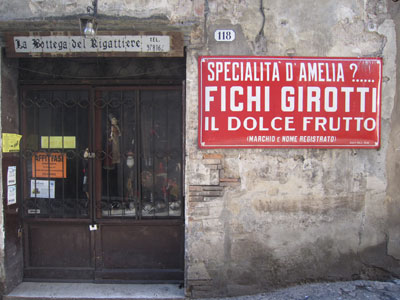 Rome is empty of tourists in late January; Umbria is even emptier, yet on most days there is sunshine for nine hours. Middle Italy’s landscapes are brought into a blissful clarity by the low angle of the sun, which makes a trip outside the Eternal City utterly bewitching. Little over an hour north of Rome is one of Umbria’s least-known towns and one of its oldest, Amelia.

As it happens, Amelia is celebrating the 50th anniversary of an astonishing discovery. Here, in a service trench in the Via Ortona were serendipitously found the crushed and broken fragments of a gigantic bronze statue of Nero Claudius Drusus Germanicus, reverently known as Germanicus. Today, in lonely if majestic splendour, this great work of art graces the town’s museum. Be in no doubt, the colossus is worth the mileage across Umbria’s rolling hills.

To reach Amelia, I took a combination of modern and ancient routes. First, the A1 autostrada for just short of an hour from Rome to Orte, a picture-book town occupying a rocky stack beside the Tiber. Then, taking the Via Amerina from Orte, I turned left onto the Via Penna in Teverina (for one mile) to visit my first port of call: Castellum Ameliano, beside the Tiber where it meets the Rio Grande. Parking at La Locanda della Chiocciola, the track winds on and down to the half-concealed nook containing the Roman port known today as Seripola.

This is an extraordinarily important excavation, the best-known Tiberside port – one of many along this stretch of the river. That said, under the flapping tin roof, gazing at the recently flooded remains, you have to take a deep breath and overlook the state of the place, and instead focus on its historic importance. Situated beneath the elevated concrete piers of the A1, the Roman riverside port was discovered in the 1960s during construction of the autostrada.

It was known before, of course, from the 4th-century Roman road-map of the Empire, the Peutlinger Table. But seeing is believing: nowadays, because the Tiber’s water levels are carefully managed to avoid flooding in Rome – once a common occurrence – it is difficult to imagine barge traffic with a reach as far north as this crossing-point.

The significance of barge traffic in the early years of the Empire has been confirmed by a recent survey of Seripola made by the British School at Rome (BSR). The excavated Tiberside nucleus of half-a-dozen buildings beside a monumental bridge is only part of the story. The BSR survey shows at least the remains of a dozen households lining the Via Amerina as it struck out north-eastwards towards Amelia, some 16km (10 miles) away across the hills. Such was its status, the BSR team concluded, Seripola was graced with a shrine or temple of some substance, inviting travellers to pause and perhaps seek some repast at a hostelry in this discreet coombe within the hills.

Despite the film of mud left by the recent flooding, the genuine rural wealth of the place is evident from the monumental dwellings of the late Republic and early Empire. Shopfronts have spacious dwellings behind them. Cut-stone blocks are much in evidence, as well as cheaper building materials. The basalt paving slabs of the great arterial road itself survive as if the road were in use only yesterday. Traces of Medieval activity were also found in the excavations, undoubtedly because the bridge spanning the Tiber continued to provide a rare crossing-point from Umbria into neighbouring Lazio.

Romantic refuge
By Medieval times, though, the community sought refuge from the intermittent floodwaters on a hill immediately above. I could not resist laying siege to this romantically positioned hill: so, risking life and limb, I fought my way up to where today only hunters after wild boar venture, to see its ruined tower.

Reaching it by way of the old track on the south side, I found not one but two towers. The most prominent guarding the Via Amerina probably dates back to the 12th century, but was clearly occupied until early modern times. The second tower lies cloaked in shrubs towards the north end of this flat outcrop. It is 12th century in date or earlier, and contains a magnificent drainage system feeding a cistern to avoid, given its lofty isolation, daily trips down to the river below. The block-built masonry, expertly squared, resembles the surviving towers of this epoch in nearby Orvieto and Viterbo.

From this forgotten vantage-point, the northern reaches of the Tiber valley come into view, the village castles and churches of Bassano and Bomarzo being silhouetted against the skyline, across from Giove on the Umbrian side.

Having left the car at La Chiocciola (‘the Snail’), it would be improper not to mention its restaurant. In January, a big log-fire warms the dining room at this authentic and serene agriturismo. Lunch, before driving to Amelia, is wild boar stew, well-earned and fortifying after the intrepid expedition to the castle.

An elegantly illustrated new book by Arnold Esch, Zwischen Antike und Mittelalter (Munich, 2011), minutely traces the line of the ancient road to Amelia, across the most southerly hills of Umbria. Following these directions, if time permitted, would be glorious. But it would take the rest of the day, for sure. The little Roman ruins of farms along the way are like many that grace every commune of Italy. Today, though, the dramatic effect of reaching Amelia itself is sadly mitigated by the underwhelming sprawl of suburbs on its south side. Most people treat the old town as a jewel to be treasured on occasions, while normal living calls for basics and anonymity.

Amelia, as its cyclopean walls powerfully demonstrate, was a mighty force in pre-Roman times. Cato, echoed by Pliny, ascribed the foundation of the town to 1132 BC. Whether true or not, with its walls dating to the 7th to 8th centuries BC, few places have better examples of early Italy’s urban promise.

Amelia’s elevated poise above the Rio Grande is undiminished by the passage of centuries. Not surprisingly, it prospered in Republican and Imperial times, and while there is relatively little to see of the inner workings of this township from Antiquity, there is a marvellous museum in a Franciscan monastery (the former Collegio Bocarrini), just inside the formidable walls. The exhibition assembles the many inscriptions, monumental fragments, sculptures, and tomb-groups that are the norm for any self-respecting Umbrian hilltop town.

Yet, 50 years ago, the citizens of Amelia stumbled accidentally upon a treasure that is as grandiose as the cyclopean walls: a bronze statue of General Germanicus.