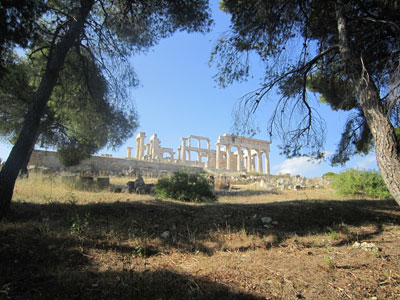 As the aeroplane circled to land at Athens international airport, I half expected to see a riot on the runway. The hysteria in the press immediately after the first failed spring election in Greece seemed to be paving the way for the end of the world as we have known it. Six months earlier, I had been in Athens to give a lecture in the American School of Classical Studies, and, unable to resist the gunsmoke, had been past the parliament and through the streets to the agora to take my own sounding on the Greek crisis.

On that blissful December day I found, frankly, little to trouble me until I ran into a squad of riot police, armoured as if for American (NFL) football, having some downtime. At the talk that night, aside from much chatter about the future of Greece itself, I was advised to visit the excavations on Aegina where Mid-Byzantine discoveries had been found recently that are similar to those we made in Butrint, Albania. I needed no second invitation; though as the plane rolled into the terminal building, it crossed my mind that perhaps my curiosity was a little imprudent.

Athens airport used to be a byword for inefficiency. Now it works like clockwork, as did the rental of a clapped-out little car (albeit expensive) to take me around Athens to the port of Piraeus. The Saturday traffic was light and frankly, eagle-eyed as I was for signs of the meltdown, all I could detect was a metropolitan tawdriness to Piraeus which has barely changed since I first ventured here 40 years ago. Entering Gate E8 (one needs to know this beforehand), a bevy of ferry salesmen alighted upon me with frenzied delirium. Getting a ticket was easy, therefore, and as ever the ferrymen ushered me into the cavernous hold of their ship with a passion that suggested space was at a premium when in fact there were only a few other Saturday travellers. In short, it seemed to me, as I seated myself with a few newspapers on the top deck to take in the Saronic Gulf, that the urgency and ritual of the ferry business was unchanged, crisis or no crisis.

The crossing to Aegina takes a blissful hour. The unedifying clutter of Piraeus is soon forgotten, and the glorious marine vistas of an inner sea reminiscent of the Aegean fill the far horizon. Gone is all sense of metropolitan madness. Only the chasing seagulls and their erratic acrobatic displays puncture an otherwise tranquil transition to an island beyond which lie the dark, vertiginous mountains of the southern Peloponnese.

The mission of most visitors to Aegina is the Acropolis-sized temple at Aphaea. But I made the 20 mile (32km) crossing to visit the island’s main ancient settlement, on a low headland jutting into still waters on the northern edge of Aegina town.

Here, dominated by a tall Doric column that, from afar, resembles an obelisk belonging to the Venetian period (and lends its name to the site: Kolona), is a man-made hill containing a rollercoaster history. First occupied in Neolithic times, this was a major fortified town of the Mycenean period. Its principal Greek building was a temple to Apollo belonging to Aegina’s apogee as a trading town before Athens overran it during the bitter Peloponnesian wars.

With such a harbour on this shipping route, the site was not deserted for long. A Hellenistic trading town was made here and indeed the whole headland was later encircled by powerful Late Antique fortifications. More interesting still is a ribbon of Mid-Byzantine dwellings tucked under the lea of the hill, close to the present foreshore. From the exploration of this miscellany of structures, excavators recently found the rare – rarest – remains of the 9th century: coins and pots.

Then the headland was abandoned in favour of an inland location, safe (so the sources tell us) from waterborne terrorism. German archaeologists brought this long saga to light, following in the footsteps of Schliemann in search of Homeric warriors, and fascinated by Aegina’s place in the larger history of this Saronic Gulf.

The excavations – especially the latest phases – challenge our preconceptions about the past and perhaps the present. More of that in a moment. But first I should continue my travelogue.

Closed for business
Ancient Aegina lies within spitting distance of the harbour, so I raced along, parked beside the archaeological site, rushed in at 2.40pm… and was politely told it closed at 3pm. So goodbye: crisis or no crisis, British punctuality in this case had long outlasted Bryon’s dominant part in the war of independence!

Somewhat irked, I sought solace in a plate of red mullet and a karafe of retsina, the only diner in a row of quayside restaurants. Here, I read more on the Greek crisis and began to empathise with the impatience of German bankers. Revived and in a good mood, I set off to visit the great temple of Aphaea on the opposite side of the island.

I arrived at Aphaea by way of the deserted Medieval hilltop village of Paliachora at 5pm and – would you believe it? – like a gaggle of other tourists, I found the massive temple closed for the day. This forced me back across the island to explore Aegina town. Here, discreetly tucked back from the promenade, I discovered the Markopolous Tower, a miniature castle worthy of a Hebridean island, which between 1827 and 1829 served as the first parliament of an independent Greece. Unheralded as a monument to modern Greece, this was a parliament designed for a bureaucracy that most European bankers would today applaud.