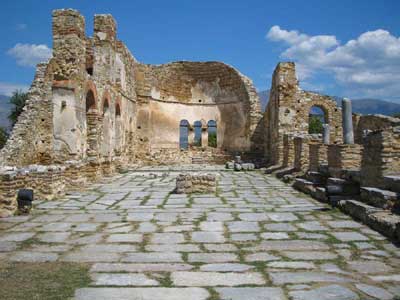 Lake Prespa is one of those anomalies of history. In 1913 after the second Balkan war, with Greek troops controlling most of what is now southern Albania, and the Ottomans utterly vanquished, the British chaired a treaty meeting in London. Out of foreign secretary Earl Grey’s long-winded negotiations with the Great Powers emerged Albania, but the area around Korca in south-east Albania was a sticking-point. Reluctantly the Greeks ceded it to the new nation in return for some Aegean islands taken during the same war.

So it was that part of Great Prespa and the western tip of Little Prespa became the south-east corner of Albania, bordering with Greece and the Former Republic of Yugoslavia Macedonia in the midst of the serene waters of Great Prespa. Few places in Europe are more beautiful.

Last summer I drove up to Prespa from Kastoria, a lakeland promontory town and one of the loveliest towns of Greece. In summertime Little Prespa lies in a verdant hollow, reached by a winding road. Surrounded by hayfields and reeds, it is an elegiac landscape.

Aghios Germanos, tucked on the east slope overlooking both lakes, is the obvious first stop. Here is the centre for the Society for the Protection of Prespa, appropriately a pelican being its emblem Up the narrow street is a European architectural gem. The 10th to 11th century church is the pride of the place, resplendent at the far end of a much newer and barnlike modern basilica. The orderly brickwork, deep splayed windows and complete covering of majestic frescoes mark it out as typical of the better-known Kastoria churches. This is one of more than a dozen churches and monasteries dotted around the lakes, the best-known being the cliff-hanging hermitages of Great Prespa which can be reached only by boat.

This seemingly remote area was part of the Bulgarian Empire in the 10th century, when some of these churches were first built. But most belong to the period after 1018 when Emperor Basil II reconquered the region, whereupon it became a familiar stopping-point for travellers traversing the Balkans from the Adriatic Sea to Constantinople.

But if you thought to pause long at Aghios Germanos you would be mistaken. A truly blissful church occupies the island of Aghios Achilleios, reached by a new pontoon bridge extending some 400 metres from the mainland. As you cross over, pelicans and marsh harriers whirl above and the constant sound of birds is simply extraordinary. The main monastery that lent its name to the island occupies a shallow hollow on the east side. It is one of several churches here, linked by a simple path. The great basilica of Aghios Achilleios was built by the Bulgarian tzar Samuel (976-1014). Although much developed, from the ruins you appreciate that this was a major aisled church with a conch sanctuary. From the apse is a good record of elegant frescoes, while an earlier dig produced a fragment of Byzantine cloth decorated with eagles. (Both the frescoes and cloth are in Florina Museum nearby.) The island boasts a couple of simple tavernas serving fish, but the monastery in this ravishing location simply begs the visitor to have a picnic and reflect deep on its history.

I returned to Prespa in February, but from the Albanian side. Driving south towards Greece from the Korca basin, the dark wall of enclosing mountains was capped with snow. We headed off to the village of Tren, crossing the River Devoll, which like many Albanian rivers had been diverted in communist times in an attempt to deploy its waters for irrigation. The result is that Little Prespa which as recently as 1945 had peeped through the Wolf’s Pass into this part of Albania, has fallen back some half a mile or more, leaving a soggy trail of reeds. The effect is doubly sad because here lies a constellation of monuments every bit as impressive as the many Byzantine churches at the far end in Greece. First, the Wolf’s Pass itself merits a momentary pause. No more than 30m across, the north side rises up dozens of metres whereas the south side is no more than 20-30m high. In the latter, overlooking the dried up channel, is a cave in which an excavation in the 1970s produced ample amounts of Bronze Age ceramics, including Mycenean wares made five hundred kilometres to the south. The south side of the Pass is surmounted by an Iron Age site with potsherds tumbling into the muddy modern track. On the high cliff to the north are traces of red ochrous rock paintings. Some Albanian scholars think these to be prehistoric, others to be simple Byzantine depictions of warriors and hunters.

We climbed up the imposing hill to the south of the gap known as Trajan (Trian in Albanian), winding our way to its girth where an immense Bronze Age wall, perhaps 2km long, runs along the girth of the slope. This great wall, we must presume, served as a refuge for the surrounding communities. It also served as an outpost for the settlement occupying the very pinnacle of the hill. After an hour’s climb we vaulted over another fortification and into a deserted medieval town covering ten or more hectares with a modest little castle on the exposed crown. The view was worth the climb: below us lay Little Prespa and in the far distance, the island of Ayios Achilleios overshadowed on this sharp but bright morning by the immense range of snow-capped mountains beyond. This, it seems, was the medieval heart of Prespa, once perhaps a town to rival Kastoria overlooking Lake Kastoria an hour to the north, or Ohrid, overlooking Lake Ohrid to the north. Unsurveyed and unexcavated, its name, though, remains a mystery. Tom Winnifrith in his recent book on the region draws attention to a lost town hereabouts known as Diabolis, which suffered sieges as the Normans ravaged the Byzantine fortresses of the Balkans in the late 11th century. Only fieldwork will resolve this.

Looking out from this eyrie into Greece and reflecting upon the sublimely serene churches a few kilometres away, you begin to curse the need for borders. The path from the Wolf’s Gap leads along the north and south shores to the frontier where presently entry is forbidden, though many have passed along these routes in recent times. Here, at either end of Prespa, you feel in the middle of Europe, a place blessed by nature and history.