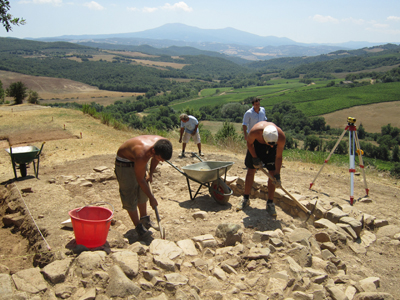 For years I have directed small armies of excavators through a project manager, so returning to the role of quartermaster (and co-director) was, to be truthful, both nostalgic and scary. I have always said an excavation runs on its food and accommodation. Rather like a well-honed army, fuel up the excavators, create an atmosphere of expectation and fun, and the dig will proceed at a blistering and focused pace. So, when a few days beforehand I learnt that the Tuscan school where we were housing the team lacked showers, I resisted panicking – I just woke early in a sweat! Fortunately, Montalcino’s mayor came up with a solution: we could use the town’s main school (and, of course, the students would then add to the polyglot international diversity in this quintessential hilltop town). The kindly mayor awarded us three classrooms and a corridor sufficient for an office. The showers – the apparent bonus – lay a block away in a new sports’ hall down the road. One communal shower for the boys; one for the girls… The real bonus in the mayor’s largesse, as it happened, was the school cooks. Tuscan schools eat Tuscan food. Imagine it! With litres of red Brunello wine served in pitchers thrown in for cultural good measure. The two cooks were exactly what we needed – caring mums who were fascinated by the mix of hungry Italian excavation supervisors, and effervescent American undergraduates. Indeed, by the end they were running a cooking class.

Of course, the students on seeing their dorms through the prism of jet-lag managed to contain their immediate alarm. Sauntering down the street in only a towel seemed to hold no fears for them (though they subsequently admitted it did). But Tuscan food works magic: so, apart from the fare prepared by our two wizards, I took the ensemble to a bar as dawn broke to feast on fresh-baked cornetti (of the mouth-melting kind) filled with cream or frutti di bosco; and then, just to make sure that the eager-beavers sustained a lively digging pace, each morning I ventured to a grocer’s shop to buy kilos of fresh cherries. Was it surprising that after four weeks in this corner of paradise, the team partied and excavated with equal vigour?

Now, of course, a new dig is not only about bed and board. There is the intriguing initial encounters between students and supervisors – in this case Americans (plus one Spaniard and one Scotsman) and Italians. With the temperatures reaching 40 degrees, and the thankless task of topsoil and vegetation removal occupying the first days, I wondered how this cultural encounter might fare. My anxiety was misplaced. The students – three men and 11 women – engaged with an enthusiasm that left me thrilled. They were undeniably shattered by the first three days, but were determined to stick the heat and build a rapport with their bosses. So, the weeks passed swiftly: with the World Cup being soon forgotten, trips to famous places were in turn utterly eclipsed by a night festival in a remote hilltop town and, another time, by swimming in the Mediterranean. Of course, as this was a summer-school, due diligence was done to educating the team: my co-directors and I proffered lectures on the project and its significance; the students were attentive and even eager. But truth be told, it was their good humour for each other and the grind of field archaeology in record temperatures that made me nostalgic for those times when I was a supervisor or digger. Once experienced, who can ever forget being galvanized by the fray of new relationships, too much drinking, and the hunt to answer historical questions in truly sublime places?