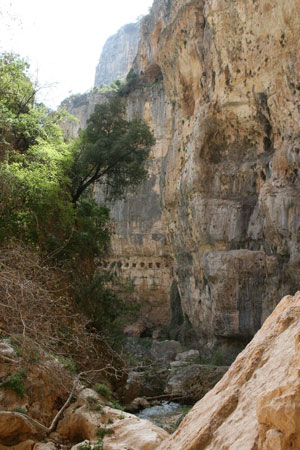 Turkey’s rugged Eastern Mediterranean coastline is no longer simply attracting weary farming communities but also eager archaeologists and adventurous travellers in search of its long and varied history. In this piece, we will travel through Mersin province, the site of ancient Olba Territorium, taking in some of the areas with the greatest archaeological highlights.

Newcomers beware: those crisp white tennis shoes had better be replaced by some good walking boots. This is often a rough topography. The Taurus Mountains sweep along the north border of the region, and there are severe geographical conditions between the Kalykadnos (Göksu) River on the west and the Lamos (Limonlu) River to the east. However, your efforts will be rewarded ten-fold by the region’s sites – and scents!

Our route begins in the east and moves towards the west and north parts of the region. We start at the coastal town of Lamos (or Limonlu), situated at a point where the River Lamos flows into the sea. To one side is the Mediterranean Sea, and to the other are magnificent ancient aqueducts (only a few kilometres apart). These aqueducts date from the 1st century AD, but continued to be used and renovated during the Byzantine Period. They took the life-giving waters of the River Lamos to all of the surrounding coastal settlements. The longest of the aqueducts, just near the coastal town of Tırtar, boasts 12 arches within its two-tiered structure. Such grand structures manifestly demonstrate the power of the Roman Empire.

From the valley, the Lamos River passes through a total of six aqueducts on its way towards the western part of the region and towards Korykos (within the modern town of Kızkalesi). By the post-Roman era, Korykos was one of the most important ports in the Mediterranean region. It is among the most splendid and well-preserved ancient cities in the region, with a rich archaeology that is the result of its long and culturally diverse occupation. Of note are its Hellenistic period ‘tomb houses’, its Roman period monumental gate, temple and bath, several Byzantine churches and two Medieval castles – one on land and the other on a nearby island.

If time allows, there are many other notable settlements along this stretch of coastline worth visiting, including Elaiussa Sebaste (modern Merdivenlikuyu) with its Roman period theatre, temple, bath, gymnasium, and Byzantine churches; or the ancient cities of Seleukeia (modern Silifke), Korasion (modern Susanoğlu), and Akkale.

Following the valley route that proceeds north through Korykos, and up on to the hilly and mountainous areas beyond the coast, archaeological surveys have revealed numerous rural settlements of the Roman and Byzantine periods. These enclaves demonstrate the important regional role played by agriculture in antiquity. Typically founded in the Hellenistic period, if not before, these settlements tend to lie on well-established routes to the sea. The routes are often still in use today, particularly among the seasonal farmers who – as in ancient times – move from the coast to the hinterland, and back, with the seasons. Many tracks are even marked with ancient mile-stones.

Moving some 5km north of Korykos, one finds one of the region’s most astonishing and must-see sites: Adamkayalar. Just below Adamkayalar’s settlement area is a series of stunning reliefs carved into the valley walls. Among the rock art images is a man reclining on a kline (a couch) with a woman standing next to him; nearby, a man holds a goat; further on, warriors strut; and elsewhere still, a woman is flanked by a man and child. The reliefs were carved over a 400 year period, from the early 2nd century BC to late 2nd century AD. They might have had some ritual meaning – certainly people today describe this as a ‘holy area’. It is a thrilling challenge to go down the hill and discover these works of art deep in the heart of the valley.

Nearby, there is another settlement at Çatıören. It contains an elaborate example of one of the region’s many Hellenistic period towers. The tower is surrounded by walls with polygonal masonry and with other smaller towers. Though it just looks like a sturdy city wall, the tower contains a temple devoted to Hermes.

As for the settlement itself, from the Roman period onwards Çatıören seems to have been mainly used for agricultural purposes – as indicated by three workshops, production installations, many houses, and cisterns. The area’s economy appears to have been based on wine and olive oil production – the building blocks of the Roman and Byzantine economy. This is suggested by the archaeological finds discovered in the region, such as numerous olive presses and wine amphorae but also by the historical texts. These places are actually mentioned in the works of ancient writers as one of the regions where famous wine was produced.

From the 4th century AD onwards, the wider ‘Rough Cilicia’ region that includes the Olba Territorium was referred to as reggio meaning ‘the wine centre with a range of tastes’. This wine is produced from dry grapes, also known as passum or abates, and believed to have powerful medicinal and health-preserving properties.

Saffron was another product for which the region was famous. It seems that saffron was a crucial resource: the geographer/philosopher Strabo (63/64 BC-c.AD 24) mentions saffron produced in Korykion Antron (Cennet Cehennem) near Korykos. He also tells how the local Roman city of Pompeiopolis was the home to saffron oil and saffron cream. By the Medieval period, Cilician saffron was used to produce golden paint.

Though saffron is no longer produced in the region, one can get a taste of the past by visiting the astonishing cave in Korykion Antron. Saffron was once produced inside the cave, as Strabo also explains. Indeed, the cave is quite massive – extending back some 200m and large enough to house a church dating from the 6th century.

The area is also highly suited to perfume production: the styrax tree, with its holly-like scent, is common along the coastline and can be used to produce perfume (and to kill bugs). One can also find Daphne, which is known to have been processed in the production of soap and spices. Certainly, this is an intoxicating, glorious area.

Following the route north through Korykos further inland, travellers will reach the final destination on our tour and the ancient centre of the region: the city of Diokaesareia. Lying just beside the Taurus Mountains, and partly within the grounds of a still-occupied village, the city has extremely well preserved ancient remains, including a temple devoted to Zeus Olbios.

In the Hellenistic period, Diokaesareia would have served as a prominent place of worship – and may have been the region’s religious centre. However, it is thought that the roots of worship here go back even further, and that the temple absorbed the indigenous religious practices of the local peoples that once lived in the region. The temple is characteristically Hellenistic, with its Corinthian columns and large ashlar masonry, although it was transformed into a church in the early Byzantine period.

The site also contains a tower, which survives to 22m high, and contains at least five floors. It, too, seems to date from the Hellenistic period (around the 2nd century BC). From an inscription, it appears to have been constructed by one Teukros, the son of Tarkyaris, who may have been a member of the local dynasty. So it seems that the Seleucids introduced their architectural style to this territory thanks to relations with the local dynasty.

As one walks through the site, the combination of modern village and ancient city reminds one just how many changes have occurred over the centuries. These days, the ancient remains are under protection, so the local village cannot encroach further onto the archaeology. There are still more remains not far from the site, this time from the Roman era, including two monumental gates, ancient roads, a theatre, a nymphaion, some necropolises, and a charming temple dedicated to Tyche, the goddess of good fortune. Wherever one looks, one finds a rich archaeology here in the rugged landscape of the Olba Territorium.

And so our journey ends, within the shade of the tower at Diocaesareia – perhaps enjoying a cup of fine Turkish coffee, some sweet oranges, and maybe a well-earned baklava. This is a wonderful area for walkers – and can be enjoyed in every season other than the height of summer.