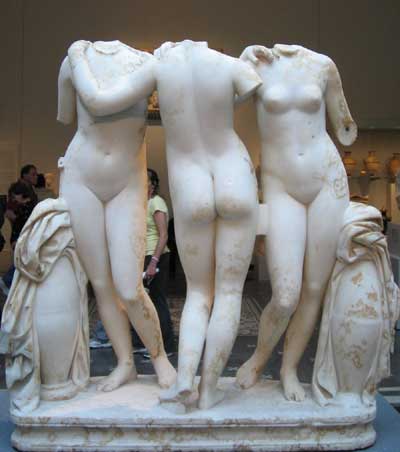 Often I wonder if as archaeologists we have lost our way. When I hear ancient theatres described as amphitheatres by site guides, courtesy of Russell Crowe’s towering performance in Gladiator, I momentarily quiver with a mixture of anger and envy. But, then Russell Crowe did stimulate huge interest in archaeology.  Visiting the Metropolitan Museum one afternoon in April I felt the same mixture of intense anger and perplexed envy. I first visited the museum 27 years ago, and, awestruck, basked in the breathtaking wealth of a true world museum. Its antiquities from Egypt and Mesoamerica were peerless, let alone the engaging galleries of Medieval treasures and American history. It was a Cold War precursor of a global age. On this occasion, though, I had come to see the new Greek and Roman Antiquities gallery. The April 25th opening was heralded on the New York subway and the city buses, competing in the advertising arena with the last television series of the New Jersey mafia family, The Sopranos. Perhaps there was some hidden symbolism here – Old (ancient) Europe now in the New (21st century) World?

Being a Saturday afternoon, huge numbers were entering the Met (as it is known). After paying my voluntary $20 entrance ticket and receiving my clip-on coloured badge, I weaved through the phalanx of families with buggies, then darted off to see the new gallery. Let me be clear from the outset. I went not so much to admire as to gawp, as motorway drivers inevitably do at car pile-ups, or as TV viewers we fall victim to Tony Soprano’s compelling business sense. And sure enough, any archaeologist worth his salt will find this carnage mesmerizing!

The new gallery is exquisitely lit. Somehow American galleries discover architects with the most sensitive grasp of light and place (a good new example is the newly rearranged Pierpoint Morgan Library and Museum in Mid-town); British galleries, by contrast, create fussy versions as though they are genetically uncertain of what material best serves the needs of illuminating the artefacts. Anyway, two galleries beyond the entrance, an open court had been covered discretely. Side galleries led off of it, while a mezzanine provides a viewing platform from where the trophy art can be majestically viewed. Without doubt, I am certain that the Met and its donors (whom I shall not grace by naming) have made a remarkable new venue. Its essence is a modern gallery that encourages the dignity of a 19th century approach to antiquities. A few glass cases can be found around the walls of the covered portico, but the thoroughfares and body of the brightly lit atrium is filled with statues, busts, sarcophagi and other exquisitely sculpted examples of Greek and Roman antiquity. The forest of objects uncluttered by modern screens is simply stunning. Rather than engage with the objects, though, I simply ambled through the afternoon crowds. Small gaggles of visitors were studying individual statues; some were simply gazing serenely at the classical craft; and here and there individuals dressed in appropriate Manhatten attire were purposefully sketching. Indeed it was necessary to pinch oneself because the murmur and concentration had all the hallmarks of a staged scene from a film. Guards, I should add, were discretely absent or tucked into corners. Plainly, the gallery designer wanted to encourage New York’s Starbucks’ community to get back to antiquity for an afternoon and, I cannot fault him – it is a success. Nowhere has more extraordinary art of the classical age, and the display is captivating.

So why I am sounding so peevish? First and foremost, most of these objects come from looted sites in the Mediterranean. Some, to be fair, such as the Boscoreale mosaics and frescoes were acquired in the early 20th century. But a good proportion of the objects were acquired more recently on the open market, after UNESCO in 1970 promulgated that all antiquities should be provenanced in order to counter the burgeoning trade in looted artefacts. I wondered, as I stared, how this middle class community would react if they had seen the car-sized holes I witnessed in 1992 at Trevignano, some 40 minutes north of Rome, where entire Etruscan grave assemblages were scooped out with a back-hoe in a night! Or, for that matter, how they would react to seeing a similar machine hole at Phoenicê in Albania, where through arrant ignorance the ashlar-built tomb was pulverised in a haste to empty its contents. Then, too, the contents of Butrint’s museum were plundered in the anarchy of 1991 and an early Imperial bust of the Empress Livia ended up within the sphere of the community associated with the Met. (We sought a little assistance from an Albanian version of Tony Soprano to have it returned…..and it was.) Bathed in the warm spring light, such thoughts might seem a little excessive for the genuinely interested New York audience.

After all, I might muse, the International Herald Tribune‘s peon to this show (26-27 May 2007) describes it as a celebration that unabashedly pays tribute to the ‘most enduring of myths, inseparably linked to the Western sense of cultural identity’. Yet is it really? Two observations came to mind as I zigzagged through the throng. First, this is very much a 19th century museological feast which has a startling (and worrying) resonance today. This global museum, in other words, has retreated to its roots in colonialism to express itself in the 21st century. Its curators and supporters doubtless feel mightily justified witnessing the eager response to their exquisite display. Indeed, so confident do they feel, that there are even references to on-going legal disputes about the status of certain objects in the new gallery. My second thought is that we, as archaeologists, have failed with the advent of globalization to convey the importance of context to an audience that is readily enthused by our trade. So, as tourism to archaeological sites and to museums grows exponentially, we as archaeologists are left scratching our heads about how a truly great, global museum, can unashamedly dignify the unfair trade in antiquities.

Yet at the same time, a thoughtful audience is gripped by a need to protect our environment and the livelihoods of the poorest who depend on tourism.

As archaeologists we have permitted a theatre where enduring dramas were performed to be misnamed as an amphitheatre, where carnage was the spectacle. Of course we must recognize the art of Russell Crowe, and of course it is important to compete with The Sopranos to get museum audiences. Yet surely, we have to combat the mindless havoc being wreaked by the arrogant policy of the Met and its supporters on places (and the communities they serve) every bit as precious as these mouth-wateringly beautiful objects in its new gallery. More to the point, surely we have to challenge the sub-mafia ethics behind this market in stolen antiquities.