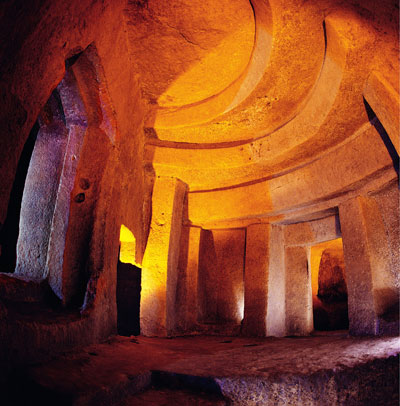 Half a dozen of us stood or crouched in the faint dawn light on either side of the great stone doorway, just inside the entrance to the main apse. The odd whispered comment was exchanged, a few words of explanation from our guide, but mostly we waited in silent anticipation, cameras at the ready. We had all arisen in the dark to meet at the visitors’ centre for some fortifying strong black coffee and sweet biscuits before trekking up a slight incline towards the majestic megalithic temple of Hagar Qim on the southern cliffs at Qrendi. But that was not our destination.

Hagar Qim, which translates as Standing Stones, glowered down at us on the brow of the hill, a powerful but benign presence, as we walked silently past and on down the slope towards the cliff edge with the Mediterranean beyond. Poking out of the sea just offshore is the tiny uninhabited island – little more than a rock, really – called Filfla, glowing in the pink light of dawn. And before us, nestling in a hollow that looks out to sea and to North Africa beyond, stands Mnajdra.

It is not hard to see why the temple-builders 5,500 years ago picked this spot: the ancient monumental sanctuary sits in one of the most beautiful and atmospheric natural settings imaginable. It was here that we waited for the arrival of the sun’s midsummer rays.

A slight murmur of excitement heralded the first tentative glimmers of light. Then a tiny but bright finger hit the top left-hand corner of the pecked orthostat at the back of the main apse, through the megalithic doorway behind us. Slowly, it grew larger, gradually spreading across the stone, lighting up the inside of the temple. The effect was dramatic enough now, but the impact would have been still greater five and a half millennia ago when the stone roof still covered the building, and the audience waited in total darkness for the first rays of the summer solstice sun to cut through the black, and mark the beginning of the longest day of the year.

The alignment of the doorway is no accident, according to archaeologist David Trump, who has written extensively about the prehistory of Malta and its sister island Gozo, and on the early temple-building culture of the islands in particular.

Mnajdra comprises three temple units set around a curved forecourt, abutting each other in a semi-circle. The first, and oldest, is a roughshod affair in the shape of a simple trefoil, and built of roughly hewn stone. A line of pecked dots on one of the uprights has been interpreted as a calendar, but the theory lacks real proof, and I remain unconvinced.

The later two buildings are both larger and more sophisticated. The south temple, closest to the cliff edge, was the second to be built and, it has been suggested, specifically designed as an observatory. It is here that we were gathered in the early hours of 21 June. In six months, another party will be here to witness the sun of the winter solstice fall on the pecked stone upright on the opposite side of the temple. On the equinoxes, the sun floods directly through the doorway to light up the central niche at the back of the temple.

Much of the south temple’s front facade and curved forecourt is still intact, lined with stone benches that hint of communal gatherings long ago. Its internal design of four apses, set in pairs with the larger towards the front, and topped off with a central niche opposite the entrance has been likened to the shape of the sitting ‘Fat Ladies’ found at Hagar Qim just up the hill.

These fabulous statues are associated with the cult of fertility and similar forms have been found in several of the Neolithic temples of Malta and Gozo – often without heads, which, it is speculated, may have been interchangeable. They are now in the National Archaeology Museum in Valetta and well worth a visit; look out, too, for the ‘sleeping’ forms from the Hal Saflieni Hypogeum, another ‘must-see’ venue, discovered in 1902 by builders who almost fell into it when digging foundations for new houses.