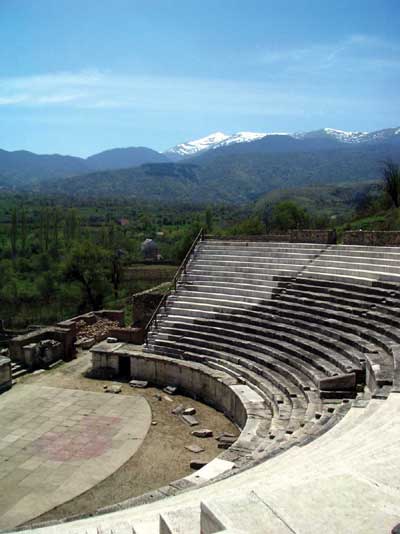 Macedonia is feeling the pinch. Being one of the poorest parts of the former Yugoslavia it is finding it hard to establish itself. Yet few parts of Europe are as strikingly beautiful. With its towering mountainscapes and seemingly miles of unspoilt countryside, much of it is palpably idyllic. It boasts outstanding archaeology, the pre-eminent sites being Heraclea Lyncestis, Ohrid, Scupi, Stobi, and Stybera, and a national museum with breath-taking prehistoric finds in Skopje.

I visited the national museum first, ambling through the tawdry parts of new Skopje built after a cataclysmic earthquake in the 1960s, over the celebrated Kameni Most arched bridge that leads beside the prominent Ottoman castle to the bazaar. The national museum, like most in the Balkans, bears witness to a long archaeological tradition. Huge in its extent, there is plenty of room to marvel at the later Neolithic clay figurines that occur hereabouts as well as in Albania and Kosova. The Classical and Medieval sections are more modest, but nonetheless well worth one’s time. Talking to the keepers of the different departments, they lament the impecunity of the new state and the extreme difficulty of doing any research. No less striking is their international perspective and a strong desire to see new foreign missions in the country.

Skopje began as Scupi, a Roman town on the Axios Way, a north-south route passing from Greece through Kosova. The remains lie about 5km outside the capital on the north side of the river Vardar. Its theatre is partially exposed in old excavations high on the hill behind the city. Lower down, Lence Jovanova of the city’s municipal museum has being excavating part of the Cardo Maximus with minimal funds. Here plenty of shabby little, late Roman dwellings are coming to light. Her proudest discovery, though, is the early Roman cemetery where the majestic inscribed tombstones remain exactly as they were, upright and grouped together, grandiose witnesses of an imperial age. With the transformation of the Roman world, the dwindling later Roman community migrated to the Hellenistic fortified point above the river, the site of the later Ottoman castle in Skopje.

The rich later Roman phases are best seen at Stobi an hour’s drive down the motorway which follows the Axios Way. Stobi is best known for Jim Wiseman’s excavations in the 1970s and his subsequent publications. The town occupies a low-lying area similar to Scupi, distressingly disturbed by a tract of the new motorway. Here it is the elegant 4th and 5th century town-houses and the extraordinarily well-preserved churches (graced with magnificent mosaic pavements) that capture one’s attention. The nascent archaeological park is dominated by this flourishing episode in the city’s long history, perhaps because the earlier periods, judging from a recent trial trench in the forum, is buried by metres of alluvial overburden.

Stobi, given its acres of excavations, merits a new museum. The down-at-heel one-room 1970s museum serves to simply whet one’s appetite. Outside it lies a tract of the little railway with the trucks used by the American mission during their successful campaigns here.

Stobi lay at a crossroads, with the Diagonal Way taking a south-west to north-east route through the Balkans up towards the Danube. Following the route south-westwards past Prilep, lies the remains of ancient Stybera. Prilep museum have been digging here and so far have been blessed with some luck.

Occupying a low hill above the river Crna, the first thing that strikes you is the blissful timelessness. The rolling countryside drifts away without modern intrusions to a ring of mountains occupying two-thirds of the skyline. Shepherds lazily tag along behind gaggles of sheep wherever you look. Storks nest on the red-roofed farmhouses next to the site and the most pressing noise is that of skylarks. Very little of the ancient town has yet been dug. Close to the theatre, though, a group of fallen early Imperial statues were found, much like those from Roman Narona (in Croatia), victims in all probability of Theodosius’s edict condemning pagan shrines in the 390s. Once again the later Roman phase is prominent with a fine church, newly restored, catching one’s eye beyond recently ploughed fields full of shattered marble and potsherds.

Half an hour’s drive away, on the far side of the modern town of Bitola, lies Heraklea Linkestris. Philip II of Macedonia founded the city in the 4th century BC, but its heyday was when it served as a staging-point on the Via Egnatia. Julius Caesar used it as a supply base in his campaigns and it seems to have prospered until an earthquake in AD 518 struck it. The first impression, once again, is its siting below towering mountains. Parts of the forum and associated theatre have been exposed (and over-conserved), though once again it is the later Roman remains that catch the eye with a newly uncovered later 5th century monumental fountain being a splendid addition. The museum, need I repeat, reflects Macedonia’s present problems: a shabby room of wonderful finds.

Ohrid is a UNESCO World Heritage Site and surely one of the most attractive places in the Balkans. The town occupies the waterfront half-way down the east side of a blissful lake and looks out westwards towards Albanian mountains capped with snow exactly as if this were an Edward Lear painting.

Ohrid was one of the great centres of the Mid Byzantine Empire and boasts fine churches from a time when its archbishop commanded great attention throughout the central Balkans. Its castle (Tsar Samoil’s fortress) was no less important, dating back to pre-Roman times with 10th century AD as well as later medieval and Ottoman phases. The brutal, recent clearance of its interior, made possible by EU funding, is an awful mistake given its historical importance. UNESCO may be promoting places well, but it urgently needs to get a grip on scientific standards. Similarly, the well-preserved Roman theatre has been sacrificied to the need for performances here with heavy-handed conservation taking precedence over scientific recording of the remains. This said, lunching on the lake-side, Ohrid conjures up a past that somehow sums up Macedonia. It feels like one of those places trapped in a time-warp where the sun shines, the skylarks are the most oppressive noise to distract you and the archaeology is tantalisingly and refreshingly unknown. The country may be facing tough times, but it is a blissful place to visit in springtime.