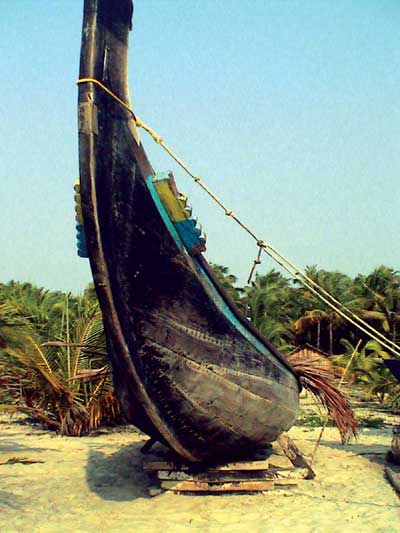 Kerala, they say, is God’s own country. Indeed, the tropical Malibar coast, washed by the Arabian Sea, is where Christianity first arrived in the Indian sub-continent. Even though few traces of this early Christian presence are visible, the country has a rich and deep history. And of all the places in Kerala, one of the most historically intriguing is Cochin (modern Kochi), which I visited this February.
Half-way up the Malibar coast, on a finger of land jutting out from inland lagoons, the otherwise idyllic and topographically safe, port of Cochin became a turbulent crossroad in the colonial period as different empires battled for its ownership: first the Portugese, then the Dutch and later the British.

Cochin still bears traces of the fortifications left by the Portuguese who settled here in the 16th century and made it into the first European township in India. While there, I was easily able to follow the run-down line of the fortifications by foot. Beyond them lie a line of Chinese fishing nets precariously held in the balance by rough boulders used as weights, creating an enchanting sight.
But no doubt, life was not always so charming. Noting the strategic position of the port – a significant way-station on the journey to the Far East – the Dutch soon wrestled Fort Kochi from the Portuguese. And in 1661, the Dutch East India Company (VOC) transformed it into a microcosm of a Flemish town.

I headed straight for Cochin’s great Dutch basilica of St. Francis which, like any church in Amsterdam, has all the characteristics of a huge barn reinforced with buttresses. Now under the protection of the Archaeological Survey of India, the church is well maintained – as a blue sign in front informs the visitor. It incorporates the grave of the great explorer, Vasco Da Gama, which is roped off as a minor shrine – even though his body has long since been exhumed and taken back to Europe. I then wandered to the nearby Dutch cemetery, which is like a little piece of old Europe, despite overlooking palm trees.

Making my way over to the far side of Cochin, I came to the medieval Paradesi synagogue, another taste of God’s own country. This exquisite little building lies off a bustling street some distance from the fortress. Legend has it that St. Thomas the Apostle came to Malabar in AD 55 and encountered a Jewish girl who so enchanted him, he stayed in the Jewish quarter (known as Shingly). Though others claim the Jews arrived much later, in late antiquity – indeed, the synagogue dates from the Portuguese period.
Back in 1900, Lord Curzon, Viceroy of India, visited it and praised it as a place at the heart of educational advancement. Today the World Monuments Fund is assisting in its maintenance. The 19th century Chinese porcelain tiled floor is intact and can be walked upon, myriads of ancient sagging glass lamps are still in use, while the paintwork and the wonderful little pictorials in the atrium are in top condition.

Perhaps it was the importance of this spot that coaxed the Portuguese to build the fabulous Mattancherry Palace next door during the 1550s. For an entry fee of two rupees (about 3p) one can climb the stairway to the elevated main halls which, renovated by the Dutch, bear the ochrous murals depicting the great legends of India. Each panel is a dense mass of figurative painting with barely any space for vistas or pauses in the hurly-burly of epic story-telling. Once my eyes adjusted to the 17th century murals, I gazed upon the rounded wide eyed figures that resemble the masks and pageants of contemporary Kerala.

Kerala, like much of India, is leading an initiative to make the most of its extraordinary heritage, building heritage hotels. For an archaeologist these hotels are fascinating harbingers of things to come: they promote an eco-tourism with a cultural angle. They are most definitely not pastiche because they are both beautiful and fascinating as buildings. With their proliferation one can only hope that historic centres like Cochin can prosper once more in a global age.
For more on the hotels mentioned here, see www.cghearth.com